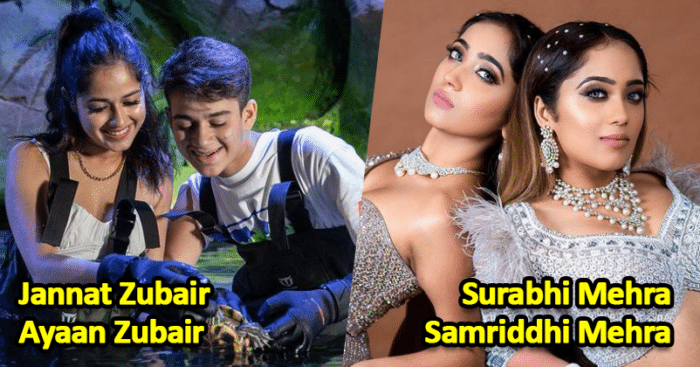 The world of influencer marketing has grown tremendously over the past few years. People have found all new name and fame in the field. But more so, there are many who are not the only ones making their family name proud.

There are many names to talk about but here are some of the most popular influence siblings.

Jannat Zubair and Ayaan Zubair started their careers in the entertainment industry at a very young age. Today, the sibling duo is leading the influencer game on Instagram and other platforms.

Ashish Chanchlani has been one of the first influencers on Youtube. His short videos have become so much popular that even some of the leading celebs have featured in them. But most importantly, the sibling duo, Ashish Chanchlani, and Muskan Chanchlani tend to get the most attention when they come together.

The twin sisters, Surabhi Mehra and Samriddhi Mehra, popularly known as ‘Chinki Minki’ have become so much popular that has also starred in some of the episodes with Kapil Sharma.

Kritika Khurana, famously known as, ‘thatbohogirl’, recently made headlines with her wedding pictures. They were stunning and the couple looked happier than ever.

Kritika Khurana Chhabra and Deeksha Khurana have been rolling out some of the most watched content on social media that has kept them on top of the charts for quite some time.