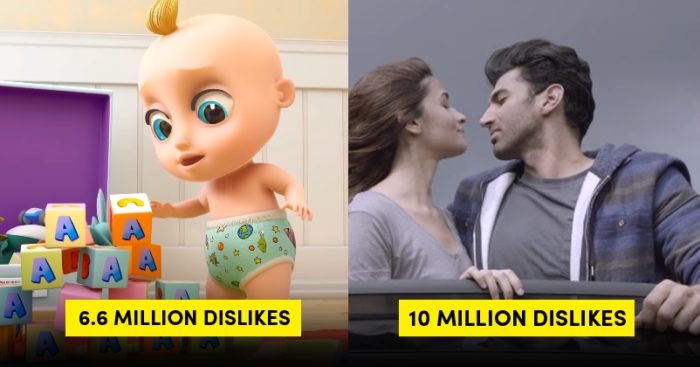 You’d be surprised to know how this trailer got around a 94% hate rate the minute it was launched. Currently, Sadak 2 has 8.90 million dislikes.

This video has 18.9 million dislikes and was also followed up with 2019 version of it that was equally hated by users on the platform.

Justin Bieber’s most popular song, ‘Baby’ has a dislike rate of 44.72%. It was released in 2010 featuring Ludacris.

As catchy as this song is, it received nearly 9 million dislikes on YouTube.

Translated from Russian to English, this video states ‘Colourful Eggs on the Farm. Educational Cartoon for Children’. However, the creepy eggs garnered more hate than likes. The video has 6.97 million dislikes currently.

Can This Video Get 1 Million Dislikes?

This song was a hit in 2017 when it was just released, but surprisingly has nearly 4 million dislikes as of today.