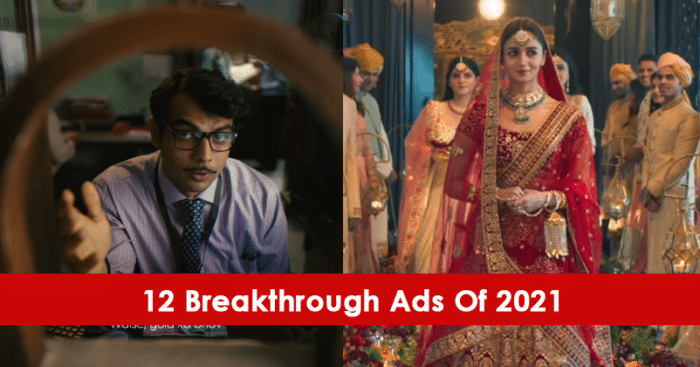 The year 2020 had dampened our spirits with the spread of the COVID-19 disease. The pandemic forced almost everyone to shut shops and a lot changed for good, post that. But 2021, with a shaky start and a roadblock in the middle, managed to uplift our spirits for the remainder of the year, especially with some beautiful, thought-provoking and poignant messages conveyed through advertising. Here’s a look at some of the top advertisement campaigns in 2021:

1.Cadbury- Not Just a Cadbury ad

Cadbury always managed to make our hearts smile with every one of its ads, leaving an imprint in our minds. And this time, keeping in mind the effects of the pandemic on small and medium-sized businesses, Ogilvy, the advertising agency for Mondelez designed a unique ad with Shah Rukh Khan as their brand ambassador.

This ad had a small story conveying how helping each other and working together helped a young woman face difficult times during the pandemic. The ad, taking a simple subject and making it a beautiful story, had a profound effect on the audiences. Written by Taproot Dentsu, the film was made by Amit Sharma.

CRED, this year threw a volley of ads at the audiences, and they are not complaining. With Jim Sarbh as the narrator for each ad, all had a dash of hilarity. The ads also featured Kumar Sanu, Alka Yagnik, Udit Narayan, Kapil Dev but the ads featuring Neeraj Chopra and Rahul Dravid were the most viewed ones.

Many ads released this year had gender equality and inclusivity as their primary theme. But a standout ad featuring real women facing issues while matchmaking was made by Ogilvy for Dove. The ad had women being rejected for their appearances rather than being judged on the basis of their qualities and capabilities as a life partner. The brand urged everyone to stop these beauty tests and accept women as they are for what they are.

The ad shows how people have been missing their families especially during festive times and how technology helps to bridge this gap between family members staying away from each other.

Amazon Prime Video’s Diwali campaign had it urging viewers to not spend Diwali on the couch watching them, but getting up to spend the festival with their loved ones. Two iconic characters from top shows of the channel-Kaaleen Bhaiyya and Siddhi, the campaign was conceptualized in-house.

The ad captures all the emotions a bride feels while walking down the aisle. Beautifully portrayed and enacted by Alia Bhatt, the ad exhibits youthfulness combined with tradition.

The ad has a young girl’s first day in a new school, and how she manages to win everyone’s heart, including her seniors who stop her in an attempt to make fun of her. The young girl’s smile is enough to win over anyone!

One was set against the backdrop of ‘giving’ during Diwali, the ad has a young COVID survivor and his mother who go to a person’s house who had helped him in his difficult times, to personally deliver Diwali gifts. A thoughtful and moving ad.

The second one depicted the bond between a brother and sister in a profound manner.

One of the strongest messages delivered beautifully. The ad urges young couples to talk before marriage on pertinent issues that may give rise to complications later, if not thought over or spoken about before-hand.

In an attempt to revive small businesses, the ad urges consumers to pause bargaining and help these businesses get back to normalcy in an easier way.

12. Cult.fit- Fitness is not an option

A hilarious ad, re-creating an iconic scene from the movie Dilwale Dulhaniya Le Jayenge. The ad emphasizes that if Simran cannot run to make it towards Raj, she won’t be able to live her life. That fitness is a necessity and not an option.