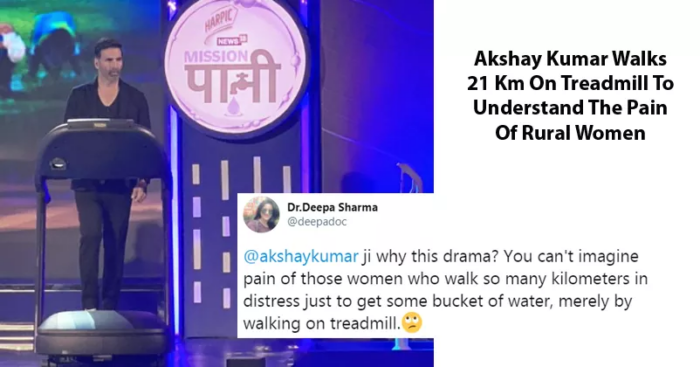 In quite a few villages in India, clean, drinking water is a hassle. Women have to walk several miles in order to fill pots and buckets of water. It is a strenuous task and unfortunately, many men marry younger women as their old wives cannot go miles to fetch water. Such is the situation of our country.

To showcase the pain of these women, Akshay Kumar decided to walk 21KMs on a treadmill to make people understand how far these women had to walk in search of water. However, this act did not sit well with the audience. AT ALL!

Akshay Kumar walked 21 kilometers on the treadmill to feel the pain of women who walk 21 kms and more everyday to get safe drinking water. Join him at #MissionPaani Waterthon, a @CNNnews18 and @harpic_india initiative towards water conservation and hygiene. pic.twitter.com/fqxiUKQ5tg

Twitter was flooded with negative reactions as most users felt that the actor was indirectly mocking these rural women as he went about demonstrating his walk in an AC room. This did not make sense and was absolutely hurtful to people’s sentiments.

Some of the reactions on Twitter read as follows,

We are surrounded by a bunch of jokers, who identify themselves actors/politicians/activists/heroes.
https://t.co/SoZhX4obmP

Do physical labour at the farm. Come home to cook, clean, feed kids and rear animals. Get beaten up by frustrated drunk husbands at night. At dawn, walk miles to fetch water in huge vessels. Repeat.

For #MissionPaani , Akshay Kumar walked on a treadmill for 21kms to understand the plight of women who travel long distances to fetch water.

Walking on a electricity powered treadmill inside an air-conditioned studio wearing sneakers and talking about the plight of women who have to walk kilometres to fetch water. 🤦🏽‍♂️
Hypocrisy thy name is Akshay Kumar. pic.twitter.com/TUznZmFx9R

Akshay Kumar walked on the treadmill for more than 21 kilometers as he wanted to understand the plight of the women who fetch water from long distance sources. #MissionPaani https://t.co/GQ8BbWDtYn

This marketing campaign seems to have got off on the wrong foot, even if the actor’s heart was in a good place! Twitterati stands by their opinion as most of us will never know the pain of these women who go through so much and still stand tall the next day to gain access to clean water for survival.

Do you think Twitterati overreacted a little or was this justified on their part? Do you believe Akshay Kumar could have portrayed a better example to make his point?