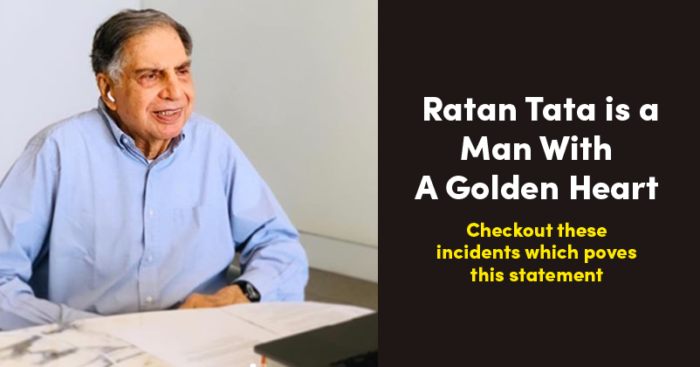 India is home to some of the world’s leading industrialists. While they do inspire us to work hard and succeed in our lives, there are a few who are nothing less than a living legend. Ratan Tata is one such industrialist who is known for his down to earth demeanor and actions that have proved that he is the most empathetic.

We bring you 4 such instances when Ratan Tata proved how humble he truly is.

Ratan Tata On Being Called ‘Chhotu’

Ratan Tata has always been known as someone who knows how to play the league. A while back, Ratan Tata posted a candid picture of himself on Instagram when he was celebrating his 1 million followers milestone. The picture showed his childlike happiness and many people liked and commented on it. However, there was one woman who called him a ‘Chhotu’, as a joke of course not to disrespect when people started trolling her over it.

I’ve just seen that the number of people on this page has reached a milestone. This wonderful online family is not what I expected when I joined Instagram and I have you to thank for it. I do believe that the quality of connections you make in this age of the internet is far greater than any number. Being a part of your community and learning from you is truly exciting and makes me very happy and I hope our journey together continues.

Ratan Tata being himself, took the comment as a healthy joke and even came out to support the woman who commented in the first place. He said,  “There is a child in each one of us. Please treat this young lady with respect.”

In February this year, Ratan Tata came forward to share who he came to be the head of the Tata Group. In an interview with Humans Of Bombay, Tata shared in length that when JRD Tata stepped down from his position from being the chairman of the Tata Groups and Tata Sons, Ratan Tata was the one who replaced him in 1990. This step was branded as nepotism then and Ratan Tata was criticized a lot. However, Tata said that the fact was that there was no one else more eligible for the role at that time.

(2/3) “After the move, I did get to spend some time with my grandmother. I would run with my dog, catch up with her car…

The instance might have happened many years ago but it surely was for the best as Ratan Tata has proved time and again that there could have been no one better for the role.

During the lockdown, people had been struggling to meet ends meet and the internet was full of people spreading hate. Ratan Tata called out this online bullying by people and urged them to be more sympathetic in these difficult times. His post was very emotional and people appreciated him being so inspiring yet again.

Ratan Tata Slammed Companies For Laying Off Their Staff

The pandemic has left everyone hand to mouth. While many of us may have not been infected by the disease itself, it surely has not left anyone unaffected. Many people lost their jobs when their companies ran out of business or were trying to cut off on expenses to stay afloat. That is when Ratan Tata came forward and urged people to not lay off their staff in these difficult times. While people may or may not have followed through with his request, his post showed exactly how empathetic this leading industrialist is.

“These are the people that have worked for you. These are the people who have served you all their careers. You send them out to live in the rain. Is that your definition of ethics when you treat your labour force that way?” asked Tata.https://t.co/xhDy3ZyFIg