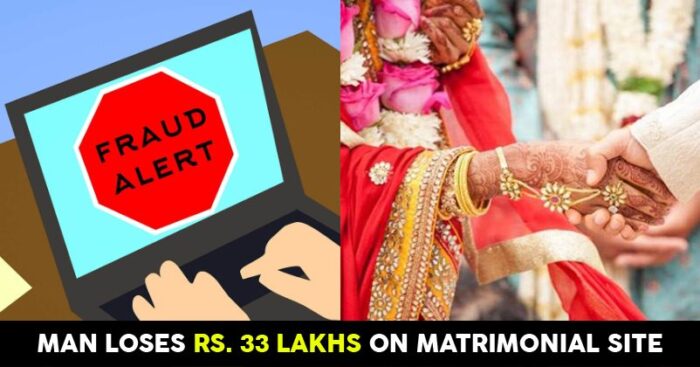 Since everything is available online nowadays, it was only a matter of time when “Love” was to be found there too. With so many social media websites & now dating apps, people have now got the chance to find love.

From Facebook to Tinder to Shaadi.com, there are numerous websites and apps to register yourself & interact to people. These apps connect you to people not just in your state or country but across the globe.

But these sites & apps need to be used cautiously. Among people who are actually there to find someone to connect with, there are many who are just looking for their next victim.

45-year-old RK Muniraja, who was searching for his soulmate learned this the hard way. Muniraja ended up losing a whopping Rs 33 lakhs to a fraud.

Already divorced once, the Chikkaballapura resident registered himself on a matrimonial website, where he got in touch with an “Italian woman”. The two started speaking frequently, after which the woman promised to marry him.

However, the “Italian” woman was alleged fraudster Daksha Patel J. She claimed to be wealthy and told Muniraja that she would persuade her parents to let her marry him. Further, she also told him that once they were married, she would give Muniraja Rs 1.5 crores, after moving to India.

On September 8th, she called Muniraja saying she was moving to India and was bringing Rs 1.5 crores in cash along with her. However, she later informed him that she had been detained by customs officials at the Delhi Airport because she was carrying such a huge amount in foreign currency.

She then told Muniraja that she needed a clearance certificate to get out of the airport, and also needed to pay the officials in Indian currency. Feeling sorry for her, Muniraja transferred Rs 33 lakhs to the account she sent him.

As soon as Muniraja transferred the amount her phone numbers were not reachable & he was later informed by his bank that he was the victim of a fraud.

Muniraja now regrets falling for the trap and urges people to be more careful when interacting with “strangers” online. Because no matter how much you talk to them online, they will always remain a stranger to you.