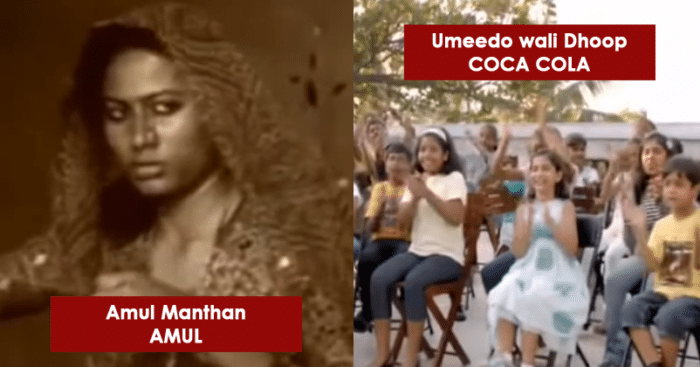 TV ads are one of the most important elements of revenue generation for the brands, but most of the time it becomes a bit monotonous for the viewers to watch advertisements continuously and is usually considered as an interruption between TV shows and programs by the viewers. whereas there are some ads that compel the viewers to stay on and watch. These impactful advertisements are so well made that they stay with us for a long time. But the question is: what makes a good and memorable advertisement? Creativity, of course. A good balance of wit, a dash of social message, a generous amount of entertainment, a pinch of satire, and the overall aesthetics are the ingredients that cook up some of the best Indian TV ads of all time. While some of these ads will surely make you emotional, some others are outright hilarious. Over the years, the Indian advertising industry has grown and explored in various domains and aspects. Creative minds are constantly producing marketing content that is not only impactful but also timeless.

Here’s a list of some of the best Indian TV ads of all time:

The iconic Smita Patil Advertisement that has emotions smeared with nostalgia, Indian culture and traditions. Amul’s 1996 ad titled Manthan tells the story of India’s White Revolution using footage from Smita Patil’s iconic film of the same name.  It is human nature to long for the good old days, when life was simpler. In India, the desire for comfort and familiarity is evident from the growing demand that led Doordarshan to broadcast, once again, its massively successful shows such as Ramayan, Mahabharat, Shaktimaan and Byomkesh Bakshi. Star Bharat followed suit with Khichdi and Sarabhai Vs Sarabhai. And soon, milk cooperative Amul joined the party, by sharing a number of its iconic ads from the 1990s and urging people to watch Ramayan and Mahabharat on Doordarshan to watch these ads. One of the dairy cooperative’s most popular commercials was the one titled Manthan, which takes footage from Shyam Benegal’s film of the same name to tell the story of India’s White Revolution, in which Amul played and continues to play, a starring role.

On Popular Demand, we are pleased to share with you the #Amul advertisement from the 1990's during #Ramayan and #Mahabharat – #Manthan pic.twitter.com/jt9fr5kQah

The older, cuter version of Daag Ache Hain. In the late 90s, Surf Excel went with the tagline ‘Jaise Bhi Daag Ho, Surf Excel Hai na’. It was only in 2005 when the brand managed to break through the clutter introducing ‘Daag Ache Hain’. With this, Surf Excel targeted housewives, especially with kids and catered to the urban audiences. This commercial helped the brand build high salience amongst the target audience and was followed by equally interesting executions over the years. The consistency and distinctiveness of the campaign led to building differentiation for Surf Excel that has resulted in strong growth for the brand.

The Bright Place Lights- the very famous happydent advertisement with a sheer hint of humor and wit, this ad has set a remarkable mark in people’s mind with it’s catchy and humorous storyline accompanied with brilliant execution. Infact it’s the only one from India in the list, which has the likes of BGH Silent Aircon’s Dads in Briefs, Budweiser’s Wassup, Cadbury Dairy Milk’s Gorilla, Nike’s Writer the Future, and others.

With it’s trending hashtag of #ItsBeyweenYou, Apna Sa Lagta Hai Apno Ke Bich- WhatsApp has set a brilliant example of how the campaign is built on the core belief that when privacy is deeply felt people can communicate as their ‘true selves.’ An excellent campaign revolving around several emotions that stitch a basic common idea of how important it is to stay in touch and communicate with your loved and close ones keeping intact ones privacy is a sheer example of creativity and wit.

Revolving around the tag line of “Umeedo Wali Dhoop, Sunshine Wali Asha” is a stout representation of hope and positivity. Considering the current pandemic scenario this ad holds true in every sense possible even today, this ad portrays how hope and positive approach towards life can change the entire perspective with which one looks at the world. It is about the celebration of a happier world full of hope, positivity and optimism-which this ad very beautifully portrays and brings the entire picture into life.


Since decades now, there has been a remarkable change in the way of presentation, subject matter and themes of the advertisements operating in India, but what remains constant is the continuous effort of these advertisements to make and bring about a positive change in the society thereby impacting the thought process and perspective/outlook with which one looks at the world.