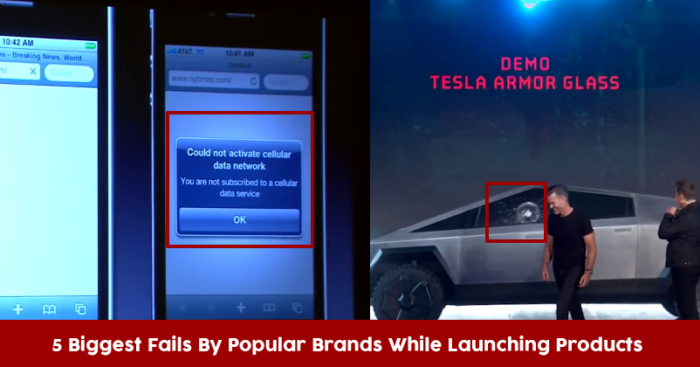 Every time a big brand launches its new product, they spend tons of money just on expanding their marketing strategies and ensure that the world is well aware of what they have brought in the market.

Mostly, marketing brings them the targeted revenue but sometimes, these big brands too, face setbacks which we can call Marketing fails. Let’s talk about these 5 popular brands that faced major controversies.

There was an event in Los Angeles, recently, where Tesla’s CEO Elon Musk was explaining features of the first electronic truck their company has ever made. He elaborated 3 major and best things about the truck and tested it in front of the audience.

All went well but the third feature was the truck’s unbreakable glass. When Musk granted permission to Franz von Holzhausen, Tesla’s COD, to throw a ball on the glass, the glass broke!

Apple launched the iPhone 4 in the year 2010. During the launch event, Steve Jobs tested and tried to open a New York Times post many times on the Safari browser, but it kept on showing errors.

After some time, Jobs mentioned that there is a slight wi-fi issue because a lot of people present there were connected to wi-fi which led to low-speed internet on the phone. The issue was NOT on the phone.

The next event is related to Microsoft. Steven Sinofsky, the former President of the Windows Division of Microsoft, was presenting and explaining features of their new Microsoft Surface Tablet in the year 2012 when the tablet stopped working.

Steven kept on completing his part of the sentence and did not panic at all. Instead, he immediately approached the dice and switched the tablet with another one and continued his presentation.

Samsung invited Michael Bay on Samsung’s Annual CES Presentation, who is a very famous director and producer to share his experiences with Samsung Curved TV. As soon as he stepped on the stage, he was in great enthusiasm and as he began to answer the first question of the host, a little hesitation was felt in his speech.

This was because the teleprompter broke and he went out of words. He decided to wait for a few seconds but could not understand what to say. So, he felt leaving the stage would be a better idea and so he did.

Tony Hanks was supposed to promote and talk about Sony company and its products at CES 2009 but he made fun of the tech keynote presenters wholeheartedly.

Even with two Oscars, Tom Hanks couldn't get through the 2009 CES Sony presentation he was contractually obligated to do with a straight face pic.twitter.com/UAXzJ30rgx

He restarted his whole speech which had been provided to him. He, in the end, did admit that he does not use a Sony computer.

So, after all these incidents, we can say that everyone makes mistakes and it is normal. There should never be made a big fuss out of anything and things must be accepted calmly. It’s a lesson that we all should learn.