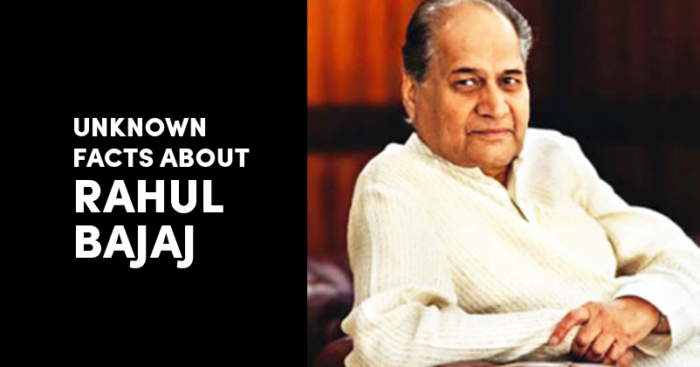 You all must be aware of Rahul Bajaj as the philanthropist millionaire who is also a part of the Parliament of India. He is the Chairman of the Bajaj Group and was endowed the business by Jamanlal Bajaj. Here are a few facts about him that you are probably didn’t know about.

He secured his Padma Bhushan Award in 2001

Even though he was given this business by his father which he took over in 1965, he was given the highest honour bestowed to an Indian civilian, the Padma Bhushan in the year 2001.

He outlined the industrialisation policies of India way before liberalization

In a summit at Harvard Business School in the 1990s, he talked about the way that country had opted industrialisation policies way ahead of the liberalisation movement in India.

He was Chairman of the Bajaj Group till 2005

From 1965 to 2005, he handled all operations of his conglomerate with ease. Beyond that, his sons, Sanjiv and Rajiv Bajaj took over the business.

He has stakes in Bajaj’s subsidiaries as well

He made a wise decision by holding stakes in different subsidiaries of his form. He has stakes in Bajaj Finserv, Bajaj Auto and of course Bajaj Group. Some of his other stakes include 14% in Bajaj Electronics, 19% in Mukand, and 2% in Bajaj Finserv.

He knew he wanted to be a business when he was just 12 years old!

In an interview with Harvard Business School, he portrayed his young experience of transitioning to business. He once exclaimed how he always wanted to be a businessman and he knew so from the age of 12 years old!