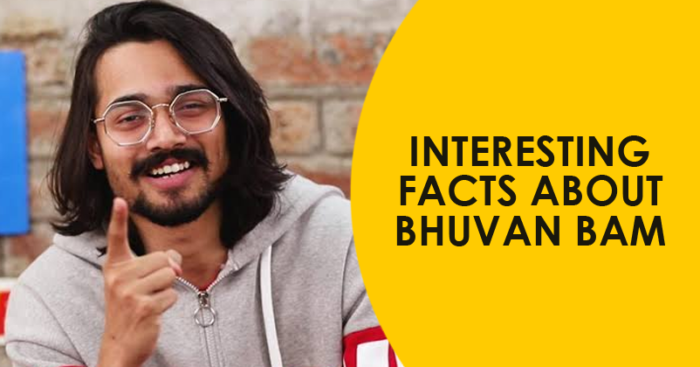 More than 10 million subscribers, known for his own series called BB ki Vines, Bhuvan Bam is not just a guy from Delhi anymore, he is India’s shining YouTube star.

Here are a few interesting facts about him –

Being multi-talented, Bhuvan Bam is known for his lead roles in videos by The viral fever, Sab group and then inviting other YouTubers to his platform. Collaborations are not only a way to reach the fan base of another channel but also a way to explore more content, explore new opportunities and share new stories.

Bhuvan Bam is known to now launch his own original songs and cover videos on his channel. Once his subscriber base hit a huge high, he realized that he could take a risk to show the world what he loves, the art of singing. Covers of songs like Jeena Jeena were a huge hit in terms of a mesmerizing performance by the Youtuber.

Bhuvan Bam is said to have a luck-by-chance entry to the YouTube world. His first video was apparently made by a mistake on his new phone, to test the video quality. Infact, his first video was taken down by YouTube and but he refused to give up. And today we all know the stunning partnership of YouTube and Bhuvan Bam!

Bhuvan’s story from a student from Shaheed Sukhdev College in Delhi to a world-renowned Youtuber has led to his inspirational TedTalks in IIITD and JUIT. He was not only a part of two huge Ted talk events but also happily shared his story for his fans to know, nothing can stop you if you don’t give up.

Bhuvan Bam is a Youtuber who is known for haters too. With so many subscribers there is also a different hate fanbase (if that’s a thing!) who criticizes his videos, comment horribly on his YouTube and other social media channels, etc. However, Bhuvan not only does he accepts such issues but is also sensible enough to not respond.

Well, this YouTube is certainly on its way up to the stars and we wish him all the very best! Thank you for making us laugh!