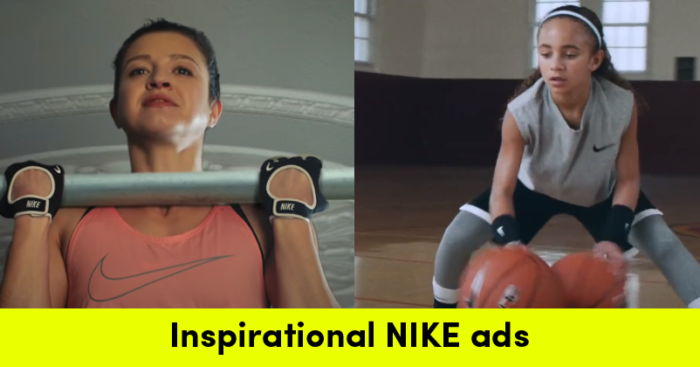 Brands have always invested more time & money in advertising & marketing as these are the crucial components to make a stand in the market. While many brands have resorted to a humourous tone in their ad campaigns, many have been taking a more inclusive approach.

Nike‘s commercials have always conveyed a strong message that leaves a lasting impact on its viewers. And today we dedicate this article to some of the video campaigns of Nike that have left us all speechless.

Nike: What are girls made of?

In 2017, Nike released a commercial on Youtube that had said so much in just a 2 min video. In the video, a young girl can be seen performing on the stage and singing ‘What are girls made of’. She starts by singing that they are made of flowers & rings & gossip & marmalade which cheers the crowd up. But soon she starts defining exactly what they are and her song takes a powerful twist when she says that girls are made of power, punches, battle, pain, perseverance, and everything not so warm.

Don’t Ask If Your Dreams Are Crazy

Believe in something. Even if it means sacrificing everything. #JustDoIt pic.twitter.com/x5TnU7Z51i

Nike‘s ‘Just Do it’ ad campaigns have always been inspirational. In 2018, Nike launched an ad campaign starring Colin Kaepernick on their 30th anniversary. The clip also features athletes like LeBron James and Serena Williams, who strive to give the very best to their sports.

Kaepernick narrates a powerful message in the video saying “if people say your dreams are crazy if they laugh at what you think you can do, good. Stay that way”. “Don’t believe you have to be like anybody to be somebody. If you’re born a refugee, don’t let it stop you from playing soccer for the national team at age 16,” he adds.

Dream Crazier is undoubtedly one of the most powerful ad campaigns by Nike. The ad shows how women have been deemed hysterical or dramatic when they have dreamed bigger or expressed themselves publically.

The ad shines a spotlight on female athletes who have broken barriers, brought people together through their performance, and inspired generations of athletes to chase after their dreams.

One Day We Won’t Need This Day | Nike

On the recent International Women’s Day in March 2020, Nike celebrated the women who have moved sport forward—in the hopes that One Day, every day will feel like this one we mark on our calendars.

You Can’t Stop Us | Nike

Nike‘s latest ad campaign was ‘You Can’t Stop Us‘ and it was truly inspirational. The ad was not only appreciated for its message of inclusiveness and dedication during these difficult times of the pandemic but also for its split-screen stitching technique.