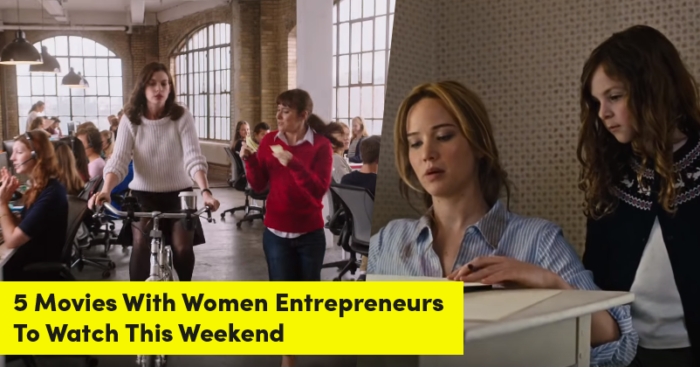 What was the last movie you watched? As the weekend is here, we have curated a list of some great movies that show the rise and shine of women entrepreneurs. Are you one already or plan to become one in the future? If your answer is Yes to either of these questions, this is the page that you should bookmark now!

Every woman has had to climb up the ladder of success at one point in their lives and the road to success is never easy. If there’s a Mark Zuckerberg in someone, there is also a Joy Mangano in someone else. Our list consists of girl bosses, woman entrepreneurs and girls who have had nothing, to begin with to having everything they ever wanted.

Joy Mangano is the typical rags to riches flick that will leave you inspired by the end of it. With JLaw (Jennifer Lawrence) starring as the lead in the film, she portrays the story of Joy Mangano, a single mother who primarily works as an airline booking executive. Once she discovers a self-wringing mop, she delves into the tricky business territory but eventually finds her way through her breakthrough.

Here’s an inspiring life lesson if you’re still not convinced about this movie: “I want you to remember something because a lot of times people get nice things and they start to think differently. We got here from hard work, patience and humility. So I want to tell you, don’t ever think that the world owes you anything, because it doesn’t. The world doesn’t owe you a thing.”

Actress Anne Hathaway plays the character of Jules Austin who is the founder of a New York-based fashion startup. All it took was 18 months for her to build her startup from a kitchen to a whole workplace of at least 200 employees. That’s the dream, right? Robert DeNiro plays a senior intern at the firm who shows the caring bond employees and employers have irrespective of their age. Learning never stops, and hence senior or junior, you’ll always have someone inspiring you no matter what.

Melanie Smooter played by actress Reese Witherspoon mostly concentrates the move in her love life rather than her entrepreneurial ideologies. However, we admire the woman in her who refuses to sacrifice her work for love. Witherspoon’s acting makes this movie all the more interesting.

The ever admirable Diane Keaton plays the iconic character of J.C. Wiatt in Baby Boom. So, why are you not watching this movie already? Wiatt is a management consultant who loves her work until the point a toddler enters her life. How can she balance her work and personal life then? Watch the movie to find out how you can keep both your lives irrespective of the situations. The key is to embrace it, without mixing the two.

If you haven’t watched The Devil Wears Prada already, we would urge you to add this movie to your watchlist that showcases Anne Hathaway and Meryl Streep‘s best antics. Miranda Priestly played by Streep is the typical boss of the fashion industry which was based on Anna Wintour, the editor of Vogue. Her presence makes her employees fear her wrath as she mixes one fashion show after the other with her personal life. As an intern, Hathaway beautifully develops a friendship that goes beyond the four corners of the workplace, and how!