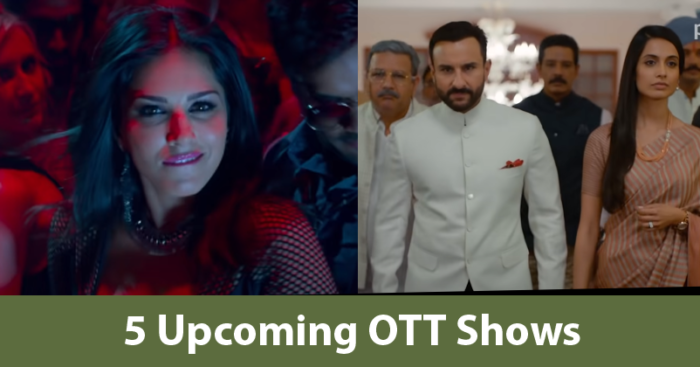 Bringing in the cheer of the New year, we’re waiting for some of the best OTT releases on Netflix, Amazon Prime, Voot, Hotstar, and more. While some of them have already announced their release dates, others are still working towards it. Last year was the rise of the OTT scene, and this year, we are waiting to see the fuel to the fire. And isn’t this just the best kind of fire?

After Saif Ali Khan’s stint in Sacred Games seasons 1 and 2, he returns back to the OTT scene with Tandav. Starring the gracious Dimple Kapadia and comedian Sunil Grover in a never-seen-before role, the story will follow the intricacies of the life of politicians and how they can put everything at stake. And we mean everything! Tandav is directed by Ali Abbas Zaffar and will launch on 15th January on Amazon Prime.

Don’t you just love the Mishra family? They are back at it with Season 2, sharing more tales near and dear to our hearts! The cast includes Jameel Khan, Geetanjali Kulkarni, Vaibhav Raj Gupta, and Harsh Mayar. Season 2 will launch on SonyLiv on 15th January 2021.

Manoj Bajpayee’s The Family Man was awaiting season 2 for the longest time. After witnessing new sequels to some of the most popular Indian OTT shows last year, they have finally announced the launch date of this show as well! February 12 will be the auspicious day and will start right where it left. This enthralling spy drama is the best of its kind, directed by Raj Nidimoru and Krishna DK.

Zakir Khan is one of the most well-established comedians of our time. This year, he has a contact for 4 shows with Amazon Prime. He would be doing three comedy specials known as Tathastu, in the form of a series. And of course, you must’ve seen Chacha Vidhayak Hain Humare? Season 2 is going to be filled with all the laughs, chuckles, and tummy clenching attacks! Get ready to have a fun-filled year.