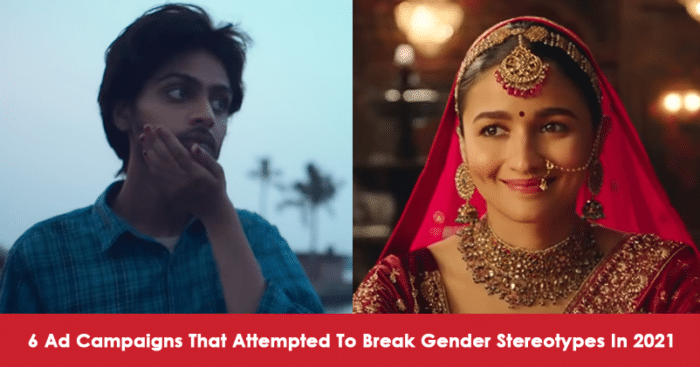 With the first half of the year being a tab bit dull, the second half, showed a lot of promise on the advertising and marketing front, especially in an attempt to normalize gender inclusivity and break stereotypes around it. Raising our hopes, reminiscing our childhood, and continuing our fight for a gender-equal society, many ad campaigns this year gave us poignant messages on gender inclusivity. Here’s a look at 6 breakthrough campaigns that challenged traditional norms and worked towards breaking typecasts.

This campaign was made by FCB India and launched during Navratri, which celebrates Goddess Durga, who is an embodiment of empowerment, strength and power. And while the message is delivered in a harsh and hard-hitting manner, what it does is bang on! Makes you think as to why does the society who worships women for 9 days during a festival, gets busy in demonizing her at any given instance for the rest of the year.

The Indian wedding places a lot of emphasis on rituals and customs, out of which the ‘Kanyadaan’ holds special importance. But the brand attempted to change the narrative from ‘Kanyadaan’ to ‘Kanyamaan’, stressing on the importance of giving the daughter, an equal and important place in the relationship and getting her in the family with respect. Well enacted by Alia Bhatt and other actors, the dialogues and the concept are the real heroes.

The ad brought back nostalgic memories of the ad it was re-created from. However, it was heartening to see the reversed gender roles, normalizing women to be tough and men to show their emotions.

One of the year’s masterpieces, the ad had stories of real women facing judgement during the course of matchmaking. The impact that a single comment on her appearance can have on a woman, can be demeaning and she could lose her self-confidence. The ad beautifully shows how judgements and rejections coming out of those judgements can hamper a woman’s self-esteem.

Another hard-hitting message of women facing issues at workplace. Biases and prejudices against women still exist in society and even at work. The ad runs a plethora of examples of how women are subjected to stereotypes and still not taken seriously on their talent and merit, but are judged on the basis of their gender.

The ad has a young boy trapped in the body of a woman, who wants to come out, and who with unconditional support of his family transforms into a confident and cheerful young woman. The jewellery is just a part of the entire premise, but the simplicity with which the story has been conveyed is mesmerizing.