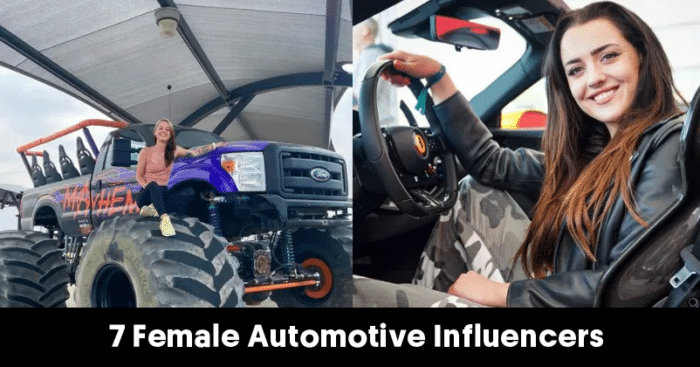 It’s safe to say that the automotive industry is dominated by men. With technicians to car racers, the industry is heavily dominated by men. However, quite a few women have been taking the internet by storm for being car-aficionados and putting up content pertaining to all things cars. Here are a few of the most inspiring women!

CEO of Girl’s Auto Clinic, she is on a mission to empower girls and enable them to repair their own cars. She earlier worked at Dupont and left in order to teach women how to repair their cars by themselves and not rely on anyone else. She inspires her followers every day with her motto of being a self-sufficient mechanic.

A Germany based race car driver, she is a recognised athlete at just the age of 19. She shares her love for cars on social media and is quite a known star. Her audience is german by a large majority although she mainly communicates in English.

Obsessed with cars, she has gained two decades of experience in the automotive industry at just the young age of 26. Her social media career has led her to collaborate with Redbull and she has also hosted a famous online show Drift Queen. Her career in this field started when she posted images of her working on her Vintage Car which blew up when everyone was surprised to find a young girl with one.

A popular Mexican who goes by her Instagram handle, @naturechola, she is a Honda partner who loves to go camping and trekking. She uses her platform to talk about mental health, racial bias and the environment.

Sonja Reid aka @OmgitsFireFoxx is a Canadian gamer who lives in LA. She is in a partnership with Twitch and also collaborates on sponsored posts with Karma Automotive. She has also been listed in Forbes’s 30 under 30 in 2016 and is worth an estimated 16 million dollars.

She is one of the most widely recognised female automotive influencers with over 9 million followers. She majorly posts content pertaining to exorbitantly luxurious cars and also has her own TV show called “Car Crews”.

A post shared by Alex – that girl with the cars (@supercarblondie)

With over a million followers, she’s a 7x CrossFit Games Athlete and is one of the most popular fitness influencers on the internet. She is associated with Jeep and embodies the spirit of the brand quite well.