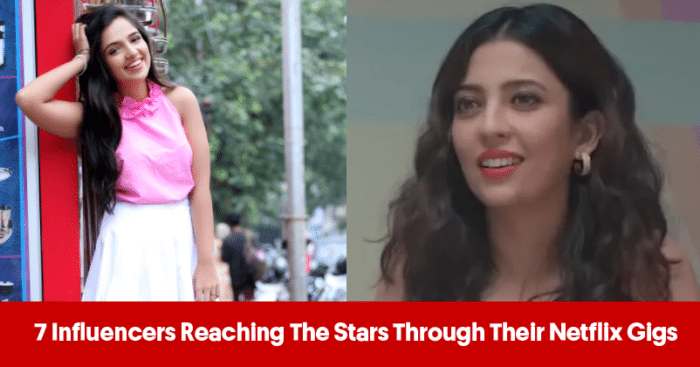 The influencer world is going strong with new and talented stars rising to the top. While you may be aware of some well-known personalities who shifted platforms to become recent superstars, did you know that your favorites have now been featured on Netflix?

In case you missed out, here’s who you can watch on your favorite OTT platform.

Mithila has become a known name in the world of Netflix. She shot to fame with Little Things and is now seen by most teenagers and young adults who aspire to be in wholesome relationships, like her character in the show. She recently starred in the movie Tribhanga with actor Kajol this January.

Dolly Singh went from iDiva to inspiring her fans on Instagram and recently made her Netflix debut with Bhaag Beanie Bhaag with actor Swara Bhaskar. She is a popular lifestyle and fashion influencer, who is also popularly known for her comic delivery.

Prajakta made her debut on Netflix with the show ‘Mismatched!’ alongside actor Rohit Saraf. Besides this, she is also quite active on YouTube and Instagram, entertaining her fans with funny reels and more insights into her life.

Kusha has created a benchmark for entertaining content on social media. The fans love her reels on Instagram where she dons different characters. On Netflix, she played the role of Misha in Karan Johar’s ‘Ghost Stories’ which brought out a different light to her personality. Her silver screen debut? We have no doubt she’ll get there real soon!

Have you seen Engineering Girls? You might have gotten a glimpse of Barkha there, but she really stood out in the Netflix original, House Arrest. She gave a phenomenal performance on the show, and has time and again impressed fans with her fashion skills, humor, and just her delightful self on Instagram.

If you haven’t heard of Mallika Dua, you are missing out on life. Apart from being a fabulous entertainer and comedian, she made her debut on Netflix with a talk show called Midnight Adventures where various other A-list celebrities also joined as guests.

The duo is quite popular on Instagram with Ahsaas being an actor since she was a kid, and Parul joining the bandwagon and owning her startup, Nish Hair. They can be seen together on Netflix in the show Girls Hostel, which is now awaiting a new season!

Which of these shows and movies have you already watched?