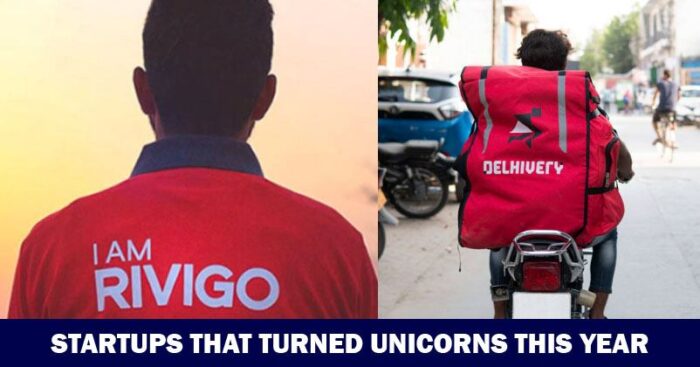 Where in 2018 eight Indians startups turned unicorns by reaching the $1 billion valuation mark, 2019 was seen adding a bunch of its own to the list with the latest addition being the logistics start-up Rivigo.

Here’s all the Indian startups that turned unicorns in 2019:

Rivigo is the latest startup to join the unicorn club. It raised $4.9 million from South Korea’s KB Platform Fund and after the deal was closed it is now valued at $1.05 billion.

The first to become a unicorn this year Delhivery raised $395 million from Softbank after which it was valued at $1.6 billion. Founded by Sahil Barua, Mohit Tandon, Suraj Saharan, Kapil Bharti and Bhavesh Mangshali, it created a stronghold in the market by partnering with e-commerce majors like Flipkart and Paytm.

The grocery retail start-up became a startup in March after closing its Series F round of funding with an investment of $150 million which is valued at $2.3 billion.

The funding was led by Bigbasket’s earlier investor Alibaba, along with a new investor Mirae Asset.

Ola’s subsidiary Ola Electric also turned a unicorn-like its parent company this year in July after raising $250 million from Softbank.

After raising ₹4 billion from Ola’s existing and early investors Tiger Global and Matrix India in March, it also raised funds from the former Vodafone Group CEO Arun Sarin in May. Some of its other illustrious investors include Chairman Emeritus of Tata Group, Ratan Tata.

The 11-year old startup had a dream run in 2019, after signing up with IPL and the BCCI as its official partners. The cricket world cup along with IPL helped it clock in stellar numbers. In an interview with Business Insider, one of its founder Bhavin Sheth said that the startup hopes to hit 100 million users by the end of the year.

India and US-based Software-as-a-Service (SaaS ) platform Icertis became a unicorn in July this year after it raised $115 million in funding from Azim Premji’s Premji Invest and US-based VC firm Greycroft.

The company which offers contract management has 5.7 million contracts across 90 countries. Some of its are Adobe, Airtel, Cognizant, Infosys and Microsoft.

Founded by Jaspreet Singh and Milind Borate in 2008 the Indo-US startup Druva joined the unicorn club in June after it raised $130 million in a round led by Viking Global Investors. It also saw participation from funds like Neuberger Berman and Atreides Management.

Existing investors Riverwood Capital, Tenaya Capital, and Nexus Venture Partners had too participated in the round.

The company was acquired by Baring Private Equity Asia in July which gave it a valuation of $1 billion.