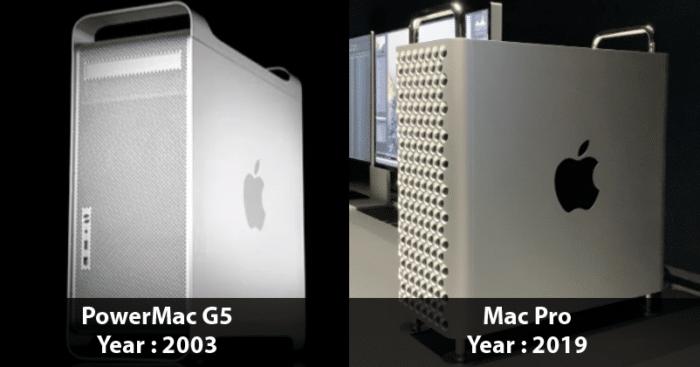 Apple’s Worldwide Developers Conference or WWDC 2021 is set to kick off tomorrow with a bang and we are here to showcase a rundown on all the hardware announcements that the company has made over its years as a market leader in the business. Considered to be one of the biggest software events to be held, the company has taken rather big strides in establishing momentum and revolutionised the tech industry.

Let us delve deeper into understanding all the launches that have taken place over the years.

The most powerful mac of its time, the device was designed for professional users and graphic designers and incorporated the first 64-bit processor to be ever used in a personal computer. It supported up to 8GB of RAM and it received updates until 2005.

This premium display had a one-piece aluminium design and featured dual USB 2.0 ports. It was available in 20-inch, 23-inch and 30-inch screen sizes. The latter had a sticker price of $3299 and was only compatible with the Power Mac G5.

Apple unveiled the first Mac Pro in 2006 and the company set foot in the high-end desktop computer segment for professional users. On the exterior, the Mac Pro looked like the Power Mac G5 however, it had redesigned interiors which gave access to hard drives, RAM slots, and PCI cards. The base version of the Mac Pro started at $2499 at the time.

With a lot of fanfare for the 3G connectivity that the newest iPhone came with, this one ran on a new mobile operating system called iPhone OS 2. The App Store set the score for the revolutionary technology that Apple was yet to launch and Apple sold over 1 million units of the iPhone 3G in the first weekend of the launch at $199.

The iPhone 3GS was announced as the successor to the iPhone 3G as it looked quite similar to the earlier device launched, however, this one came with a 3MP camera capable of recording video. Additional features included a voice control feature and a cut, copy, and paste feature in the iOS 3.

This new device brought in a significant change with the launch of a new design language. The flat glass look definitely proved to be an upgrade from its predecessors and Apple also introduced a retina display and a front camera with FaceTime.

A professional laptop aimed to be sold to musicians and graphic designers, the new 15-inch MacBook Pro was super thin and light. It also featured a retina display. It started selling at $2199 while being known as the “most beautiful computer”.

Nicknamed as “the trash can”, Mac Pro this product was positioned in an entirely different manner. The product design was uber and rich, however, it failed to deliver all that it promised right from the lack of expandability to the poor cooling.

At a time when the Amazon Echo was launched, this device became the biggest tech news of the year at the time. However, its debut did not gain the momentum that Apple was hoping to achieve and suffered issues related to the ones that the iPod Hi-Fi proposed.

A very odd device that started at a whopping $4999, this one too did not achieve much fame. With no updates being released over the years, this device was discontinued by Apple earlier this year.

This device which starts at $5999, got a lot of backlash for its price. However, this device made up for all that professional users were looking for in the previous years when Apple did not deliver to its promise. Apple developed a complete redesign by focusing on the device’s performance and developed it with the aim of satisfying professional users.
Also Read: 10 Presentation Tips to Sell Your Ideas In the Steve Jobs Way