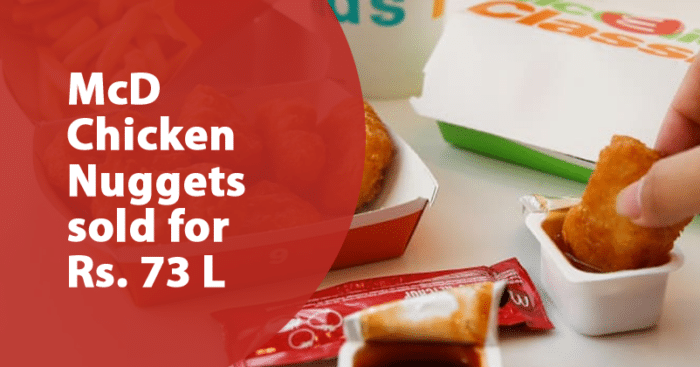 And why is that?

The news soon caught on and got viral in no time. The Among Us Twitter handle also joined in on the discussion of the infamous Mcdonalds chicken nugget and demanded one too!

THE NUGGET SAGA IS OVER 🐔🍗

here is a cursed tribute to a strange week, may the winner be blessed by the bean form forever pic.twitter.com/cJwFyj9XtB

Other brands also joined in on the fun and took the discussion forward, explaining their disbelief in comical ways.

For that price it must come with Szechuan Sauce.

An Among Us shaped nugget from a BTS Meal is going for over $30K on eBay.

And no, it's not an NFT, this is a real nugget. Imagine if it was paired with some Szechuan Sauce.

Just in case you want to bid, here's the link: https://t.co/ONm0ye2UlY pic.twitter.com/Cwn6b6QLIT

A chicken nugget shaped like an Among Us character has sold at auction for almost $100,000. https://t.co/amNPPEj0vk pic.twitter.com/rUlgDysULF

McDonald’s chicken nugget resembling ‘Among Us’ character sells for almost $100K on eBay. 💰

The bidding war for this highly-coveted Among Us chicken nugget has finally ended at a whopping $99,997… https://t.co/ivSBZhKSMI pic.twitter.com/CKi43UL129

As per the description, the winner of the auction is entitled to receive the chicken nugget, frozen and air sealed to ensure freshness. The chicken nugget went quite viral on Twitter and has got everyone tweeting about it.

How tf is it used pic.twitter.com/uN7lZ9CJYE

With only ~12.5 hours left, the BTS Among Us nugget's high bid has somehow reached nearly $100k https://t.co/mR5VIaqFCt pic.twitter.com/szIpBkz64P

IM CRYING THEY'RE TALKING ABOUT THE BTS MEAL AMONG US NUGGET ON THE NEWS 😭😭 pic.twitter.com/TMQBM3LOFo

Among Us has been very responsive to all tweets and been replying wittily to all comments being made.

honestly if you thinking about it, it'd be way weirder if no coincidences *ever* happened

quick time to contact some millionaires on a good investment

😔 i have no money for it

That’s a lot of fanfare for a chicken nugget that essentially isn’t even in a condition to be eaten.