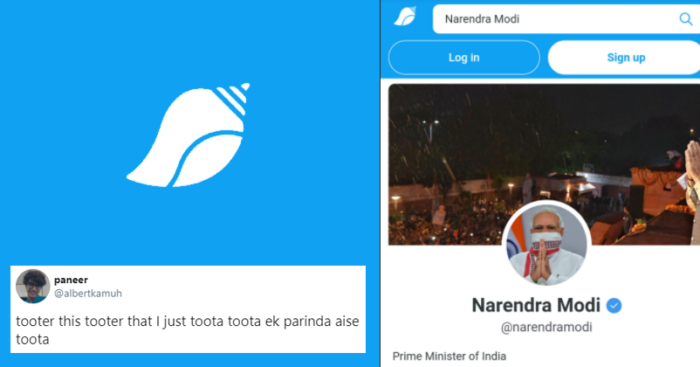 As Indians turn over the ‘swadeshi’ leaf ever since the lockdown was implemented this year, it seems another social media platform might be on the rise as a creative user launched a resemblance to Twitter, called ‘Tooter”. Instead of the bird symbol on Twitter, Tooter has a conch shell and was most likely launched in July 2020 by Nanda, with a Twitter handle @nanda

My inspiration for starting Tooter. Let's put an end to this digital colonization of India. Join me. Join Tooter!https://t.co/Kiv7J2xPFo

The platform looks like a crossover between Twitter and Facebook. Instead of ‘tweets’, there would be ‘toots’ and this is basically your Indian version of the social media giant. The About section of Tooter encourages people to join the Swadeshi Andolan 2.0 and leave Twitter because why should we be using foreign apps anyway? Wasn’t the British East India movement enough?

You will be surprised to know that various Government oriented personalities are already there with verified profiles on Tooter. The list includes PM Narendra Modi, Amit Shah, Smriti Irani, Kiran Bedi, and even cricketers MS Dhoni and Virat Kohli, alongside actor Abhishek Bachchan. This was pointed out by Journalist Venkatesh Ananth as this platform comes to light 4 months after its launch.

It won’t be a long time before other A-list celebrities, politicians, and influencers also join the Tooter bandwagon! This seems to be a good move by an Indian, for Indians, and as popular personalities do join the platform, there might be a foreseen digress from the popular social media handle, Twitter, if everyone collectively agrees to ditch foreign services. Check out these reactions by Twitter users, to the launch of our new Tooter.

Most users tried to compare the two platforms and the memes are hilarious!

So basically, you can call it you poor man’s Twitter! But hey, brownie points to the creator. At this point, so many new services and platforms have come into existence, so we definitely feel Tooter can become a success too.

Check out some other funny reactions as people share their opinions regarding Tooter.

Would you be joining the ‘Tooter” revolution?