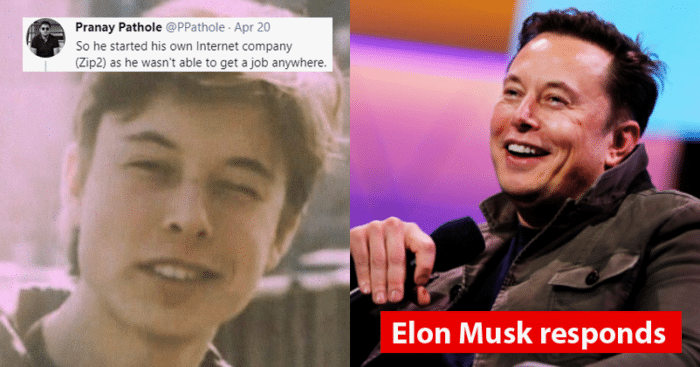 Elon Musk, the Founder and CEO of Tesla and SpaceX, is quite active on Twitter and shares his posts and quips revolving around the trends of today. In a reply to Pranay Pathole, he shares information about his early days when he couldn’t get a job anywhere.

Here’s the trend if you haven’t seen it before.

In 1995, @elonmusk wanted to work with an Internet company, he applied to work at Netscape, sent his resume, tried hanging out in their lobby, but he was too shy to talk to anyone. So he started his own Internet company (Zip2) as he wasn't able to get a job anywhere. pic.twitter.com/YRSKobvKAj

I could get a job, just not at an Internet company (weren’t many back then)

Can you believe that Musk was out of jobs? Well, everyone has a rough start and so did he.

This isn’t a shocker for netizens. Since a number of self-made billionaires have had similar stories, including Amazon’s CEO Jeff Bezos, Musk’s post has garnered more than 35000 likes with a number of reactions shared by netizens so far.

Happy #ElonMuskDay. Thank you for all you do for the world!!

Hope you had an awesome day! Thanks for all you do!!! #ElonMuskDay 🚀⚡️

it was either that or mailing AOL CD's to Americans 😛

Some users even came up with suggestions on how he could get jobs when he started.

I think "Apply" would be a logical first step.

I wonder how much times he gets asked the same question over and over again.
Someone should screen his interviewers just based on previous questions.

Have you always had an easy start or has the road to success been tough for you?

If you follow Elon Musk, you must also be aware of how he wants SpaceX to reach Mars soon so that the sanctity of living beings will not be limited to Earth itself. The company is now building a new prototype called Starship which they land to take to Mars soon.

What do you think of all of Musk’s endeavors over the years?