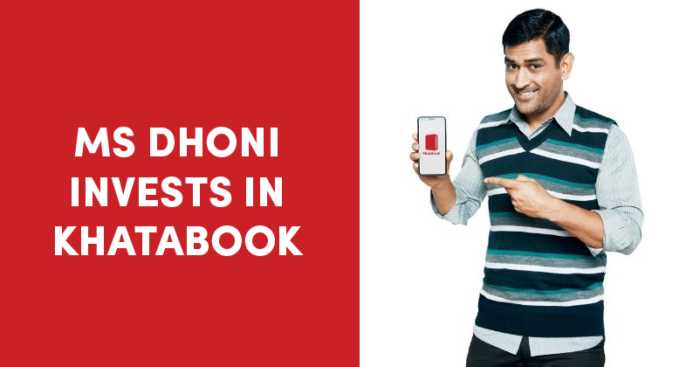 Bengaluru based business app Khatabook has recently entered a partnership with former Indian Cricket captain Mahendra Singh Dhoni. Not only will MS Dhoni make a strategic investment in Khatabook, but he will also serve as the company’s brand ambassador.

Khatabook‘s business model is that it is a business app that helps micro, small and medium-sized enterprises (MSMEs)  with performing digital transactions.

KhataBook was developed back in 2016 by Ravish Naresh, in Nanded District in Maharashtra. In four years, the app has grown to build a database of 2 crore users including the Kirana store owners and mobile recharge stores from parts of Asia, mainly India.

Nepal, Pakistan, and Bangladesh has also seen a surge in the users of the app. It currently serves over 500 different types of businesses, supports 11 languages and has recorded cash transactions of over Rs 3.7 lakhs in the last year. Khatabook claims to have 2 Cr registered merchants on its platforms and over 7 Mn monthly active merchants.

Khatabook was originally built by Vaibhav Kalpe, but Kyte Technologies acquired the company in October 2018. With the acquisition, Kalpe also came on board. Kyte was founded by Ravish Naresh, Jaideep Poonia, Dhanesh Kumar and Ashish Sonone.

Dhoni’s Vision For The App

MS Dhoni invested in the app as it has a problem-solving motive. Being from a small town himself, Ranchi-born MSD relates to the issues of small businesses.

According to Yourstory, this is what he said,

“There are many new-age companies in the country, only a few like KhataBook, are making a difference at the grassroots level. Having grown up in small-town India, I saw friends and family struggle with outdated modes of doing business and tracking finances. KhataBook has had an outsized impact on the lives of India’s small merchants and retailers.”

Dhoni’s investment in the business app has come after it reportedly surpassed 20 million registered merchants on its app.