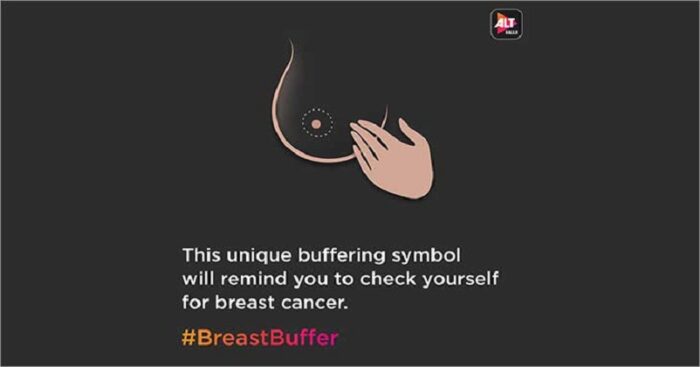 India’s leading OTT platform ALTBalaji has launched an initiative to raise awareness about breast cancer with an initiative called #BreastBuffer. The digital platform has redesigned its buffer symbol in a unique manner for this. Being a brand known for always portraying the strength of Indian women, this campaign is a great move to redefine the conventional roles women play in society.

With #BreastBuffer, ALTBalaji aims to remind the audience that they all need only two minutes of their time to ensure they live a healthy and active life. This “Breast Buffer” will remind viewers to check for signs of breast cancer on a regular basis and will help people to cure it during the initial stages.

For those who don’t know, the cases of breast cancer have increased a lot in the last decade, especially among women under the age of 50. This is mainly due to a lack of awareness about breast cancer, identifying potential threats. Breast Cancer is frequently ignored due to social taboos and misinformation.

The initiative comes along with the two-year anniversary celebrations of ALTBlaji. Also, the campaign will have videos spreading information to detect and combat Breast Cancer. These videos will be shared across all official social media platforms of ALTBalaji to reach the maximum audience.

Our leading ladies are here to fight breast cancer head-on, with the #BreastBuffer campaign. Visit the initiatives section or watch out for the ‘breast buffer’ icon while streaming your favourite show on the ALTBalaji app! #ALTBalajiOriginal #2YearsOfALTBalaji pic.twitter.com/VhnYMtY6I1

Speaking about the cause, Divya Dixit, Sr. VP and Head Marketing ALTBalaji, said,

“At ALTBalaji, we strongly believe in empowering women, which also reflects in our stories that speak about strong female characters. As a platform, we have an important role to play in emancipating women by increasing awareness about breast cancer and its implications. The Breast Buffer symbol will be a gentle reminder to our female viewers and their loved ones. Through such initiatives, ALTBalaji aims to contribute to the society in a meaningful manner, break social barriers and foster positive conversations around a topic that has been taboo for too long.”