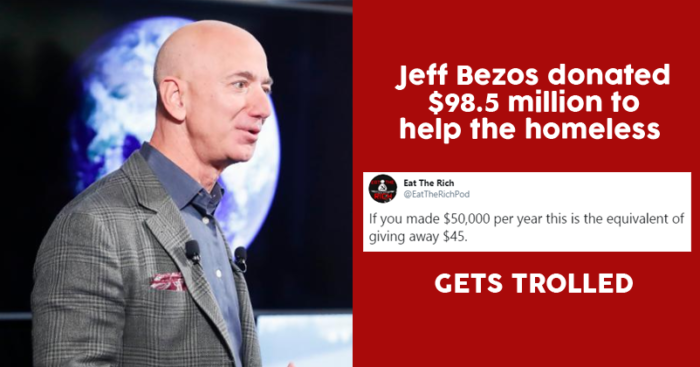 World’s richest man and Amazon founder Jeff Bezos was recently criticised on social media by Jeremy Corbyn, leader of the Labour Party in the UK followed by netizens soon after the businessman announced his donation of $98.5 million to 32 organisations across 23 states of the USA to help homeless families.

Corbyn in his tweet pointed out that the amount of Bezos’ latest donation represents only “0.09%” of the billionaire’s net worth. He further suggested him to pay his taxes instead.

Soon after Corbyns’s tweet went viral many others took to Twitter to criticise Bezos for the same.

Every 24 seconds, he adds a living wage to his bank account.

Every second, he makes enough money to feed hundreds of homeless people.

Avoids billions in TAX, but gives 90odd million to charity.

He taketh the piss. #JeffBezos

#JeffBezos gave $98 million to homeless organizations (which I'm sure are corrupt ones). His donation
Is the equivalent of someone giving $45 if they make $50,000 a year. Plus he doesn't pay any taxes.

Next time I drop a $1 in a homeless person’s cup I’m gonna need a big media PR campaign that talks about how much of a philanthropist I am. #JeffBezos #halfasscharity

If you made $50,000 per year this is the equivalent of giving away $45. pic.twitter.com/yBAeL7ExRV

The U.K. Labour party leader has frequently criticized Bezos and Amazon over the company’s low tax bills in the past, including sending the company a sarcastic birthday card for Amazon’s 25th anniversary in July.

In the card, Corbyn wished Amazon “many happy tax returns” while insisting that the company should pay higher U.K. taxes.

“You owe the British people millions in taxes that pay for the public services that we all rely on,” Corbyn wrote in the letter.