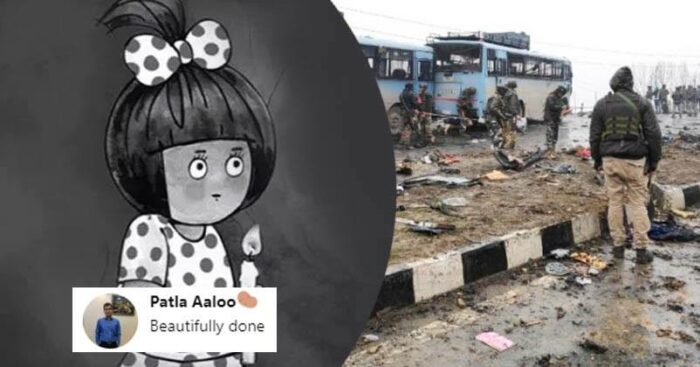 In a cowardly act of terrorism, 40 CRPF soldiers were killed in Pulwama district of Jammu and Kashmir. A suicide bomber rammed his SUV laden with explosives into a convoy of CRPF bus. The Jaish-e-Mohammad group has claimed the responsibility of the attack and it’s been one of the worst kind of attacks on the army so far.

Amul, a brand that is known to come out with creative ads in regards to current affairs, this time made the nation emotional with their tribute. 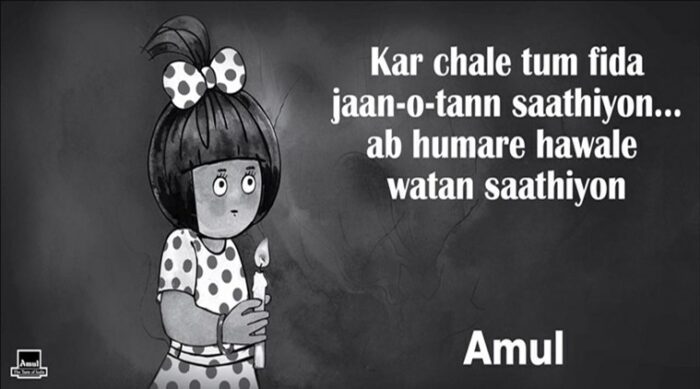 The cartoon, which shows the Amul girl with a candle in her hand, moved many online.

The bus, which was attacked, was a part of a convoy of 78 vehicles carrying 2,547 CRPF soldiers traveling from Jammu to Srinagar. The suicide bomber was identified as Adil Ahmad Dar, 20, a resident of Gundibagh village in Pulwama district of South Kashmir where he used to work in a sawmill.

An all-party meeting was held in Parliament Saturday on the attack, a day after Prime Minister Narendra Modi said those who committed the heinous act will pay “a heavy price”. He added, “To all my colleagues, in ruling and Opposition, it’s a sensitive time. We need to speak in one voice because this battle is for us to win.”

The social media is full of posts expressing, anger and rage amongst people. Celebrities have also come forward to shame the act and pray for the lives of the soldiers and mourn with their families. It’s a tough time on the nation and when brands like Amul show their love for country, it definitely is a gesture worth mentioning.