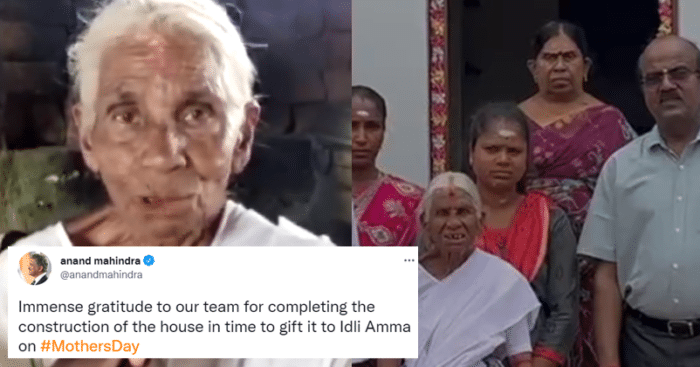 While Anand Mahindra has never failed to impress us with his entrepreneurial journey and skills, his efforts in serving humanity are exemplary too. With his presence on social media, he has been acknowledging talent and human efforts that go into making this world a better place. And this time too, he has kept his promise of gifting a house to Kamalathal, also known as Idli Amma, who has been selling idlis along with sambar and chutney, for Re 1/-

For more than 35 years, 85-year old ‘idli paati’ has been serving people, adhering to a strict schedule of rising at sunrise to make idlis, especially for daily wage earners. She has done this for years, without paying attention to profits, and working towards their betterment. Idli Amma’s journey went viral in 2019. That’s when Anand Mahindra expressed his interest in investing in her business, when he tweeted the following

One of those humbling stories that make you wonder if everything you do is even a fraction as impactful as the work of people like Kamalathal. I notice she still uses a wood-burning stove.If anyone knows her I’d be happy to ‘invest’ in her business & buy her an LPG fueled stove. pic.twitter.com/Yve21nJg47

Last year, he tweeted about Idli Amma, and promised to make her a house.

He also thanked the authorities involved in the speedy registration procedure at Thondamuthur.

🙏🏽 to the @MahindraRise team for understanding from Kamalathal how we can ‘invest’ in her business. She said her priority was a new home/workspace. Grateful to the Registration Office at Thondamuthur for helping us achieve our 1st milestone by speedily registering the land (2/3) pic.twitter.com/F6qKdHHD4w

And this year, on Mother’s Day, he fulfilled his promise and gifted Idli Amma, her new house in Vadivelampalayam. The 300 sq ft house comes with a dining hall, a single bedroom with an attached bathroom and a living hall. This had netizens showering Anand Mahindra with immense praise and hailing his kind gesture. Everyone seems to be impressed especially since he kept his promise.

So noble. Iam sure she would now have some respite while doing the selfless work she does. In a time where a simple Plate of idli is priced for rs 100 in most places, making it available at 1 rupee is philanthropic
Cheers to you and idli Amma 👏🏽👏🏽🙏🏽#HappyMothersDay2022

This is so nice Sir that too on a Mother’s Day. To get a blessings from this Amma is blessings from God. Congratulations to you and your dedicated team to get this done in short span of time. 🙏

Total Respect for Mr Anand Mahindra. Very few individuals like Idli amma. In today’s world where there is negativity and greed for power and money a story like this gives so much hope. Made my day