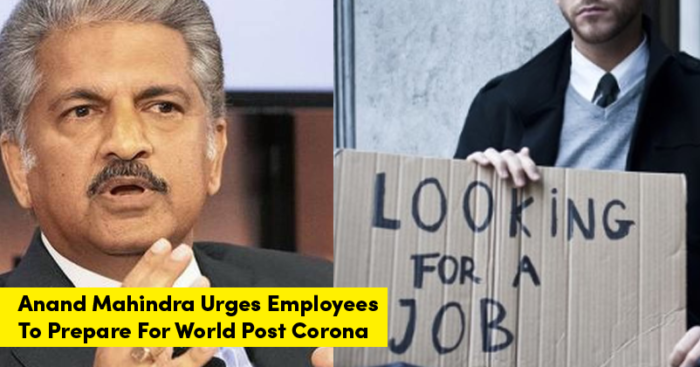 On Thursday, Anand Mahindra, Chairman of the Mahindra Group, wrote a letter to all his employees. In the letter, Mahindra called Coronavirus as “one of the most dreaded disasters” and asked them to prepare for their personal and professional future while in lockdown. Through a letter to more than two lakh employees of the group, he said that this is a disaster that has never been seen before.

He also reiterated his suggestion given during the last economic downturn in the letter. During the last recession, he had told the employees how the time of crisis can be used to prepare themselves anew. He suggested investing the available time in new ideas and innovation. He also suggested using the current time of the crisis to prepare big dreams for the future and to raise the ambitions after the crisis is over.

Mahindra said that this is not a normal time in terms of work. He said,

We are facing a crisis of a magnitude that we have never faced before. We are all worried, about our families, about our business, about our economy and about our country. Despite that, we are all doing whatever we can to carry on and are learning to live with uncertainty without letting it weigh us down.

Mahindra further added that these circumstances have given us an extension, which can be used for good. He said, By locking ourselves in the house, we have come to know how we were putting an unnecessary burden on the environment. I have never seen Mumbai so beautiful, as it is seen during the bandh … The sky is blue, the air is clear, there is no dirt on the roads.

He said, “Do we need this kind of crisis to learn all this?” Can we not live like this even after the crisis is over? Can we not use the environment in a better way? Can we not reduce carbon emissions by traveling less? Can we not follow the method of meeting and dialogue from far away to work better and to balance work and life? Most important, can’t we recreate the personal and professional attitude of living life? ”