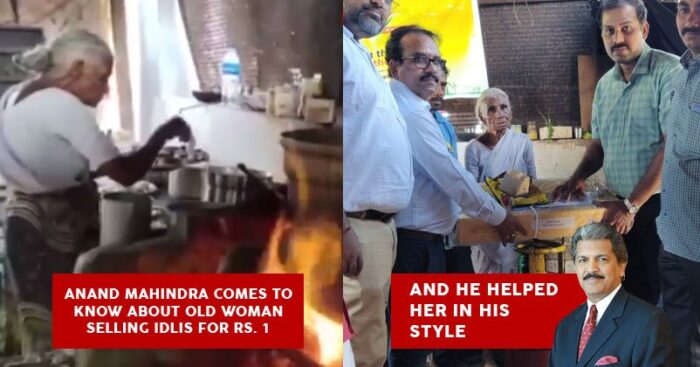 Anand Mahindra steals all the hearts away yet again with his heartwarming tweet!

Chairman of the Mahindra Group, Anand Mahindra who is known to be an avid Twitter user recently took to the social media platform to share a heartwarming story of an 80 year old K Kamalathal of Tamil Nadu who sells idlis to the needy daily for Rs.1.

He also added in his tweet how he would be happy to “invest” in her business.

He wrote, “One of those humbling stories that make you wonder if everything you do is even a fraction as impactful as the work of people like Kamalathal. I notice she still uses a wood-burning stove. If anyone knows her I’d be happy to ‘invest’ in her business & buy her an LPG fueled stove.”

Sir she isn’t doing Business but rather a Service..

Kamalathal who lives in Vadivelampalayam, a village near Peru in Tamil Nadu has been selling idlis for over 30-35 year now. She wakes up before the sunrise everyday and opens her home to the needy people to feed them the idli with sambhar and chutney. The reason behind the pricing of the idlis is that the daily wage workers can start their day on a full stomach and save money for their families.

She initially used to sell idlis at 50 paise per piece but as the ingredients got expensive she raised the price to Re 1.

She sells over 1000 idlis a day and while speaking to India Today about her food she said, “Profits are not my priority but feeding the people is what drives me to work.”

Further responding to a fellow Twitterati who replied to his tweet saying, “Sir she isn’t doing business but rather a service”, Mahindra tweeted, “The captions say that she sees it as her business venture. Let’s not take away that pride from her. (Yes, her purpose is not profits & that makes it a social enterprise.)”

The captions say that she sees it as her business venture. Let’s not take away that pride from her. (Yes, her purpose is not profits & that makes it a social enterprise.) https://t.co/Sb9eGHfA77

In a series of tweets further Mahindra tweeted how he would be happy to support the lady with the continued supply of LPG and showed concerns for her over using the wooden fire for cooking.

I’m happy to support the continued supply of LPG. Our company teams in the area will, I’m sure, be happy to provide assistance too. https://t.co/ccUnIBCfGN

The wood smoke isn’t good for her health. She can make the choice though. https://t.co/Kcw7ByvRu4

This is how Twitterati reacted:

People like you make me come to twitter for inspiration and believe that things can get better.

Dear Anand sir . Your support had made this possible. A tweet can change life of someone if it’s a positive tweet.

Sir, ur an awesome inspiration and I am a fan of you for your philanthropic activities. It's not this instance for which I am saying…It been consistent. You always support good stuff…You spread positivity and I like it.. Cheers Sir

Kudos to the legend and his philanthropy.