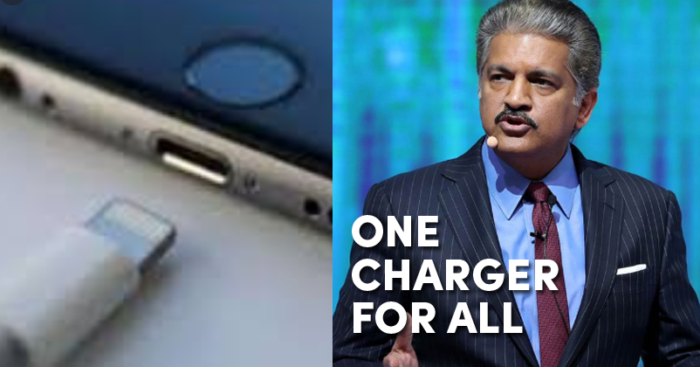 In recent news, Mahindra Group Chairman, Anand Mahindra, has made a statement in favor of the EU’s proposal to pass legislation that mandates smartphone manufacturers to adopt a shared charging cable standard.

While sharing a video on the World Economic Forum (WEF) report shared on Twitter by Erik Solheim, Mahindra exclaimed that the issue is big and real that people have to carry multiple chargers for their electronic devices. Mahindra also suggested that this proposal will also help in curbing the e-waste.

This seems like such a trivial issue but frankly a big deal for those who have to carry multiple chargers if you have more than one device. This is a breathtakingly simple proposal made more urgent due to the sword of electronic waste hanging over us https://t.co/MuOqBhzyqD

According to the WEF report, every year, the EU generates 12.3 million tonnes of electronic waste and multiple chargers could be one of the major problem areas. The European Parliament, in January, had voted in a majority, 582 to 40 votes, for a resolution to adopt a common charger across all devices. Lawmakers are expected to table the draft legislation by July, Engadget had reported.

Smartphone manufacturers, however, are not very pleased with the idea. The new proposal would require these manufacturers to re-design the charging system for their respective models. This would ultimately add to the cost.

Earlier in 2019, the European Commission had adopted the Ecodesign Directive which outlines energy efficiency and other requirements for various home appliances such as dishwashers, refrigerators and washing machines.

According to the European Commission’s official press statement, the regulations will not only improve energy efficiency but also save EU homes €150 per year.