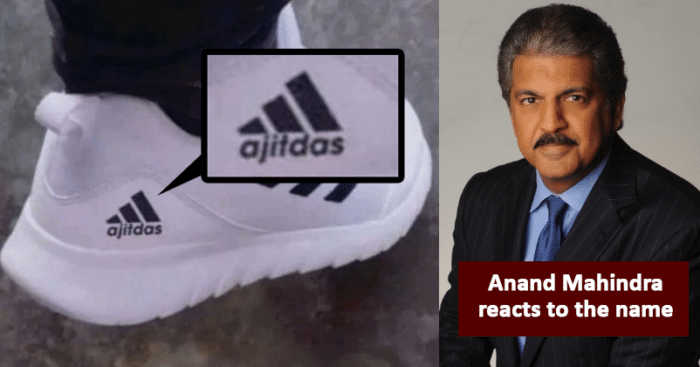 Anand Mahindra has been known for his very active and interactive social media presence.

With his tweets and posts, Mahindra has been in touch with the general public. He has also been a great supporter of talent that goes viral online.

From funding startup ideas to lending a helping hand to find the right support, Mahindra has contributed to society in many ways.

However, his tweets are not all about that. He is known for his witty and humorous tweets and people love to read them.

Recently, Mahindra tweeted a picture of an Adidas shoe rip-off indicating that the two brands may be related somehow.

The picture of the white sneaker that Mahindra shared had a logo of ‘Ajitdas’.

Mahindra wrote in his tweet how ‘Completely Logical’ the show logo was. He joked about how Adidas and Ajitas might be from two brothers ‘Ajit’ & ‘Adi’.

Mahindra’s tweet has since received more than 18k likes. People have been finding his take on the rip-off hilarious and have been sharing some of the most relateable comments.

I have seen one and it is written over there kali das, 😅

Adi is one more brother pic.twitter.com/NughZdxanq

All Das brothers are businessmen 😂

Anand sir promoting #fake adidas with some sense of humour! 🤣