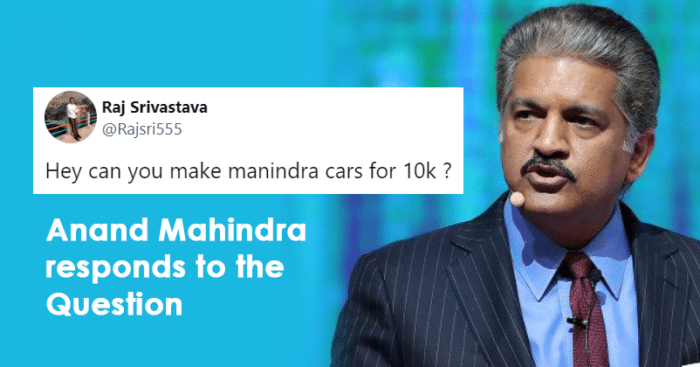 Anand Mahindra, who is the chairman of Mahindra Group, is one of the most successful businessmen in India. Not only is he an industrialist but also one of the leading philanthropists this nation has.

He has been known to provide help to the talented and to get all the support that they would need in order to find the success they truly deserve.

Mahindra is pretty active on social media and every now and then, his tweets become viral for all the right reasons. He uses his social media handle to reach out and connect with people who are working hard in life to achieve their goals.

He has always come through with the promises that he makes online. Whether it was to help Idli Amma to set up her kitchen or to gift an all-new car to the Paralympics gold winner Avani Lekhara, Mahindra has always appreciated the talent and done his bit to support them.

Mahindra’s tweets have made him a people’s favorite and his tweets are likely to go viral almost instantly. His recent tweet has yet again become viral on social media.

The industrialist had posted a tweet quoting the Thomas Cup winner Kidambi Srikanth when a man, Raj Srivastava, urged Mahindra to launch a car under 10k.

Hey can you make manindra cars for 10k ?

While his request was absurd and might have gone unseen, Mahindra responded to it in the wittiest way possible.

We’ve done even better; made one for under 1.5K 😊 https://t.co/6ccHGYxTYB pic.twitter.com/wmf9sNpWqR

Mahindra shared a picture of a miniature Mahindra Thar toy car model priced at under Rs. 1,500 which is available on Amazon. His tweet went so viral that the toy car became unavailable or sold out on the website.