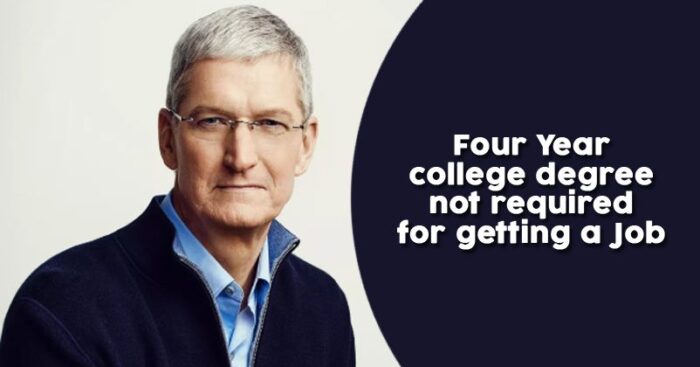 Times are changing very fast as the growth of technology has made people face weird situations. A lot of people are facing unemployment issues even after getting degrees from reputed colleges and people who are leaving colleges in between are achieving success with their problem-solving skills.

Apple’s CEO Tim Cook also talked about this topic recently. “I don’t think a four-year degree is necessary to be proficient at coding. I think that’s an old, traditional view. What we found out is that if we can get coding in the early grades and have a progression of difficulty over the tenure of somebody’s high school years, by the time you graduate kids like Liam, as an example of this, they’re already writing apps that could be put on the App Store,” TechCrunch quoted Cook as saying on Friday.

Cook gave this statement earlier last week when he visited an Apple Store in Orlando, Florida, to meet 16-year-old Liam Rosenfeld. Rosenfeld is one of the 350 scholarship winners who will be attending Apple’s annual WWDC event next month.

According to Cook, many businesses have not adopted technological advancements and still using very old technologies, but with more solutions from SAP and Apple, and tech-savvy employees of the future like Rosenfeld, that could change, the report cited Apple CEO as saying.

What are your views on learning a skill online without college? Do let us know your views in the comments section.