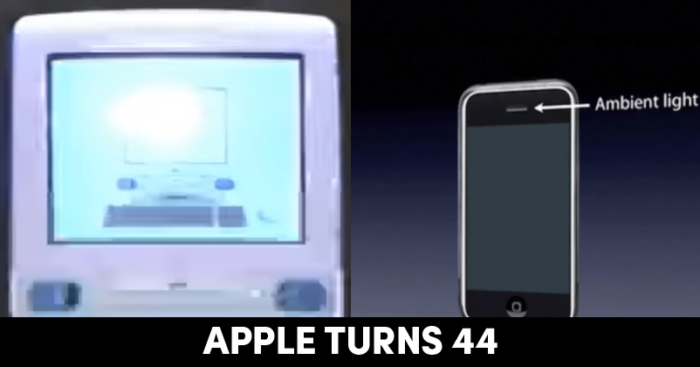 Seriously, guys, this is not a joke. It definitely is Apple Inc’s birthday today and the popular tech brand just turned 44! While most of us can’t see past the iPhone, the company has developed many other iconic products since its launch. Apple was founded by Steve Jobs and Steve Wozniak in 1976. Trying to build small accessible computers at home, they gradually build an empire after decades.

To mark the company’s anniversary today, we take a look at some of its enigmatic launches that has created its brand image over the years.

The first of their hard work was displayed in the Macintosh computers released in 1984. It was called the Macintosh 128K, which was a smaller, way convenient version of the hardware available at that time.

Do you know the value of the iMac today? It stands at KES 6 million. Its inception began in 1998. Jobs was trying to create a different approach and the USP for this product was to ‘think different’; breaking boundaries and a lot more. This product is what gave the company a boost after which it only saw success.

Back when the 2000s began, the iPod was the sensational product that everyone wanted their hands on. Some may also say that this product ignited the sparks for Apple and the music industry as a whole. A compact and stylish MP3 player was desirable back then, and it had space for at least 1000 songs.

iTunes stands as one of the easiest and most popular streaming services available online. Back in 2001, no one really thought that music could or should be bought online, but two decades later, here we are. Of course Jobs saw the potential of our race to imagine digitisation 20 years ahead of the launch. iTunes has had major changes to its branding proposition over the years to stand where it is today, which is the only bummer we see.

Lastly, the product that everyone wants and the gadget that most of today’s generation has. Currently, iPhone is running its 11th model and will soon be launching its 12th. With new features developed every year since its inception in 2008, this gadget has been a hit amongst Apple’s consumer base and has increased its popularity over time. A full touchscreen device is what the tech industry needed and every manufacturer jumped to the idea henceforth. We do have to thank him for this amazing innovation.

And if you are reading this through your Apple iPhone, Happy Birthday to you as well!