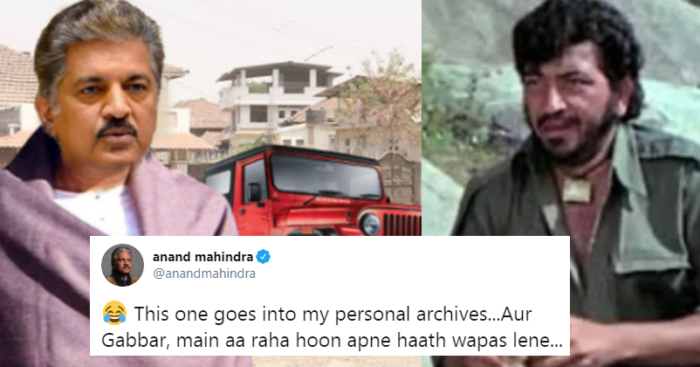 Anand Mahindra recently started a campaign asking for slogans from and for the new Mahindra SUV. Upon receiving a bunch of replied, the Chairman of Mahindra then responded complimenting an answer that definitely left him impressed. This slogan was inspired by the movie, Sholay.

What is the Mahindra Thar?

The new Mahindra SUV, the Mahindra Thar was revealed on Independence Day this year, on 15th August 2020. Everyone is excited about the new four-wheeled beast and this new slogan campaign has definitely got the fans wanting for more! This one-liner inspired by Sholay definitely stole the cake, and he shared his review of the same on Twitter.

You just came up with one of the best lines I have heard for this beast…😀 Someone please create a visual meme for this quote.. https://t.co/cjyh4iuD9Q

This inspired a number of new memes within the quick turnaround time and Twitter definitely is taking this seriously. Check out the memes below, one even being shared by Anand Mahindra himself! It seems it is one of his favourite movies.

Anand Mahindra also expressed his desire of having the Mahindra Thar in his own garage. The model is awaiting its official launch on October 2nd. It will be available at a starting price of Rs. 10 lakhs, with a 4×4 vehicle. He disclosed the first look of the Thar on Independence Day itself.

Come inside my garage, please… pic.twitter.com/JuZIs7OEp4

The Mahindra Thar will be available in the LX and AX variants. These variants have some really special highlights that are not available in the predecessors. The engine options include the 2.0 litre mStallion TGDi petrol and the 2.2 litre mHawk diesel engine. The cabin of the car is also upgraded in comparison to its 2010 version, roof-mounted speakers and washable upholstery.

A number of people also complimented him regarding the make and comfortability of the model, and rightfully so!

And some others created more one liners in accordance to the one liked by Anand Mahindra.

Are you getting your hands on the Mahindra Thar as well?