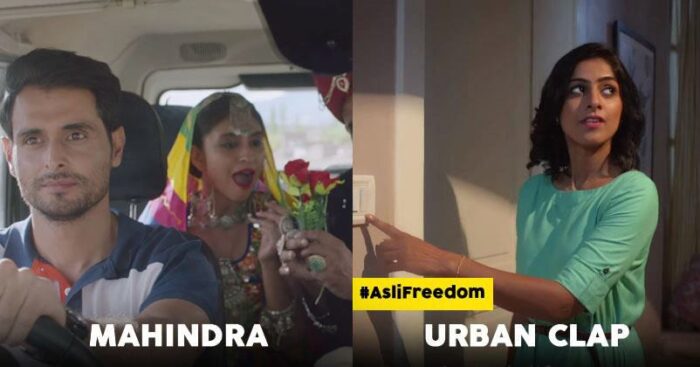 India is completing its 73 years of Independence this year. To celebrate and express their happiness for the day, many brands have come up with a slightly different type of campaigns.

Every year brands have dedicated their campaigns to our freedom fighters, Indian citizens and to our national anthem. But this year they have taken up more recent topics of our country and worked their respective campaigns around it.

Here are the best campaigns that caught our attention.

United Colors Of Benetton‘s ad campaign was all about #UnitedByHarmony. The digital film showcases how a simple act of compassion and mutual understanding can allow us to co-exist in harmony and peace.

Mahindra Adventure‘s beautiful campaign depicted the freedom and right to knowledge and education even to the remotest parts of our country. Project Paper Bridge – Independence Day | Live Young Live Free is how the brand is urging people to join hands with the great cause.

Tiles company Kajaria Ceramics has rolled out #DeshKiMitti, a 360-degree power-packed multimedia campaign led by a mega ad film starring Akshay Kumar. The campaign is a reflection of a strong nation that excels on multiple fronts.

The #Justletmebe has taken upon the most important issue our country is facing at the moment. Sugar Cosmetics has urged the people of our nation to learn to let people be without judging or opposing their choices, views, and opinions.

Bajaj Alliance has launched a campaign video which tells people that they should have the freedom to love. The video highlights LGBTQAI+community coming together, cherishing and celebrating their true freedom to love, highlighting the sentiment of Independence day which every Indian has.

#InTheNameOfLiberty is Liberty’s initiative to exemplify the current scenario. They took examples from everyday life like racism, gender inequality, disrespectful behavior towards women that we encounter and choose to ignore.

The ‘Power of One’ campaign captures similarities between the Indian Army and school-going children, both paying their respects to the Indian flag, and shows the former’s rescue efforts during natural calamities.

BookMyShow’s charity initiative, BookASmile, expresses its gratitude to the Indian Army by pledging to contribute towards their welfare as well for victims of flood-hit regions in India, this Independence Day.

Taking advantage of both the occasions – Raksha Bandhan and Independence day, Gits Food launched a new video that pays ode to all the soldiers who stand tall to protect the country.

The #AsliFreedom sale campaign highlights how by using UrbanClap services, consumers can live comfortably without worrying about spilling drinks on the sofa or leaving

Conceptualized and executed by the 22feet Tribal Worldwide, the ‘Truly Indian Burger’ campaign explains how McDonald’s burgers are an amalgamation of the best agricultural products from across India.