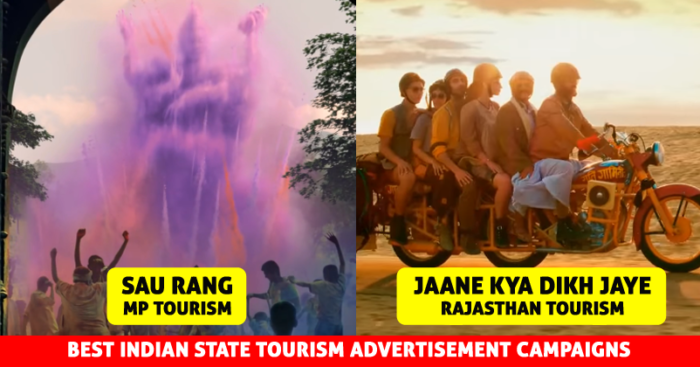 In this hectic world, traveling has become a great stress relieving activity. Many companies have set up in the metro cities that guide people how and where to travel. Travel and tourism are also very important because it brings an experience of different cultures and the type of people that live in our country. Government is trying to promote tourism from many years. In order to attract new visitors in different states, most of the states in India encourage people with their advertisement campaigns. Have a look at some of the best state tourism ad campaigns of India:

This advertisement campaign gained huge popularity and showed the cultural and religious form of Gujarat, this ad featured Bollywood legend Amitabh Bachchan and won the National Tourism Award for 2011-12. A famous slogan from this ad was ‘Breathe in a bit of Gujarat’.

Madhya Pradesh is known as the ‘heart of India’ because of its geographical location in the country. The ad tries to attract people by showing different colours of MP by featuring key tourist attractions such as Kanha’s tigers, Khajuraho’s famous sculptures, Mandu’s Jahaz Mahal, Sanchi Stupa and Ujjain’s Mahakal Aarti.

After the floods that Uttrakhand saw in 2013 decreased the number of travelers to visit the state. To promote tourism once again in this beautiful state Wilderness Films India made this amazing ad campaign.

Rajasthan tourism always comes up with creative ad campaigns. This ad shows there are many things in Rajasthan that can surprise anyone.

Jammu & Kashmir can make anyone go mad for its amazing mountains and this ad campaign has done complete justice with the beauty of the place.

‘Chhath’ is a very important festival for the people of Bihar. This ad perfectly captures how it feels like celebrate a festival at home. This ad won many hearts and was a very good way to promote tourism in Bihar.

Do let us know which is your favorite among all these and you can also suggest the state tourism ads that can be included in this list.