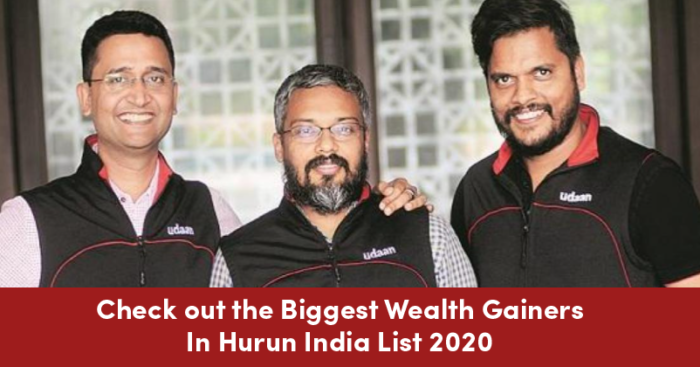 Udaan is a B2B trade platform, designed specifically for small & medium businesses in India. The company was co-founded by former Flipkart executives Amod Malviya, Sujeet Kumar, and Vaibhav Gupta in 2016.

As per the recent report by Hurun India, Udaan is among the top 10 highest valued unicorn startups in India. Udaan ranks 156th in the Hurun Global Unicorn List 2020 with a total valuation of US $2.5 billion.

The report also states that the startup has raised around US$900 million in total funding to date. Out of which, US$30 million was raised in March this year and earlier, it had raised US$585 million in October 2019. In association with IIFL Wealth, Hurun India has released a wealth index according to which Udaan co-founders have come across as India’s biggest wealth gainers in the last one year.

The founders had their wealth increase by 274% on account of strong investor interest in B2B e-commerce and topped the biggest gainer list in IIFL Wealth Hurun India Rich List 2020 for the second consecutive year. The valuation of Udaan increased from INR 20,000 Cr in October 2019 to INR 52,500 Cr in February 2020.

Chigurupati Krishna Prasad’s, founder of the pharmaceuticals company, Granules India’s, followed the lead of the Udaan founders and was the second faster riser with an increase of 218% in his total wealth.

While talking about the index, Anas Rahman Junaid, MD, and Chief Researcher, Hurun India said, “19 individuals managed to double wealth in the IIFL Wealth Hurun India Rich List 2020 of whom 5 were able to triple their wealth over the last year. The top 20 fastest gainers are based in India and spread across sectors, indicating the holistic investment opportunity in India’s domestic market.”

If we talk about the wealthiest individuals in India, the report states that Mukesh Ambani ranks no.1 with an increase of 73% in his wealth. With a total net worth of INR 6,58,400 Cr, Mukesh Ambani continues to be the richest man in India. Hurun India has also stated that Mukesh Ambani’s wealth gains Rs 90 crores every hour since March lockdown.