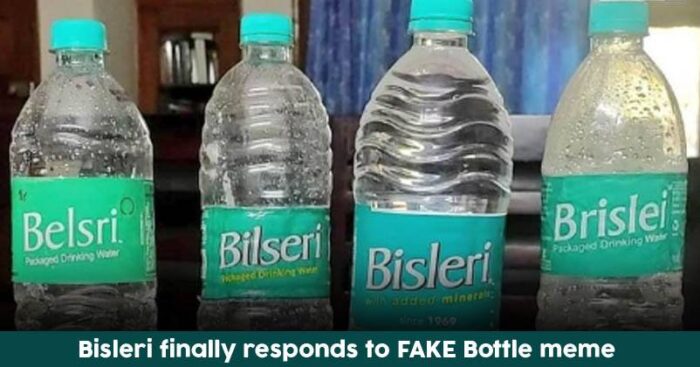 Fake products have been on an increase in recent times. We might have come across many such products before but we never really do something about it.

Recently one such fake scam received limelight when someone shared a picture of multiple fake bottles of Bisleri. The fake bottles were placed along with the original mineral water bottle brand and people shared the picture with hashtags like #BeOrignial #BeBisleri.

Belsri Bilseri #Bisleri Brislei
Duplicate brands with same logo and trademark confuse the customer. We need to stop this. pic.twitter.com/kbKFIZPeJs

It did not take time for the picture to turn into a successful meme. Soon the picture went viral on Twitter and people started tagging the official Bisleri handle too. This brought the issue to Bisleri‘s attention and their response was equally interesting.

When it comes to hydration, trust nothing but the Original water.
Here’s how you know for sure
– Check for ‘Bisleri' on the crown & at the bottom of the bottle
– Check for ‘with added minerals’ on the label#BeSamajhdaar #BeOriginal #HarPaaniKiBottleBisleriNahin pic.twitter.com/kELcTu0vu1

Talking about the insight behind the campaign, Anjana Ghosh, Director, Marketing at Bisleri International Pvt Ltd, said, “In a category as universal and homogeneous as bottled water, differentiating between local companies and brands becomes difficult for consumers. Although consumers ask for Bisleri, they eventually settle for any bottle of water handed to them by the retailer. Additionally, the paradigm of being identified with the category, though is an advantage, has posed a big challenge for us. Hence, to address these issues, we launched the brand campaign.”

To tackle the issue of fake bottles, the brand had earlier introduced dual language labels across the country.

Ghosh added, “Labels in local languages are not only emotionally appealing to consumers because they help them read and understand the language, but also help them spot the difference between fakes and look-alikes from original Bisleri,”

The problem of fake items or copy of originals has been persistent. Brands along with the Indian Government‘s support should take more severe actions in ensuring that their customers are not cheated with.