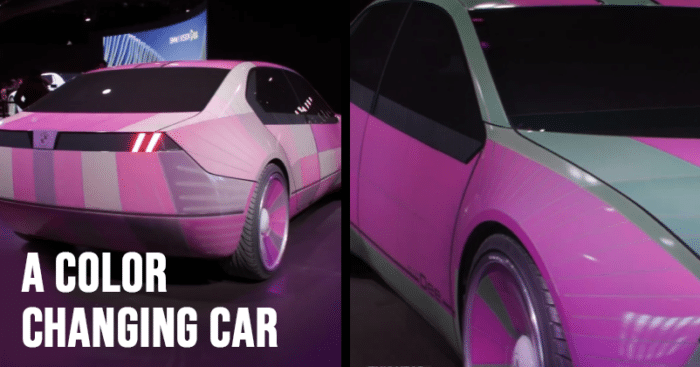 At the major IT trade show this year, BMW showcased a novel new concept: a color-changing car.

In just a year, BMW’s E Ink-powered color-changing idea moved from being monochromatic to having a full rainbow of different colors and tints. The manufacturer claims that the production of the impressive technology may be closer than you believe.

A concept for a vehicle that speaks like a person, adjusts color to the driver’s mood and has dashboard displays.

BMW just introduced its first color-changing car, and to appreciate it, you must see it.

The company claimed that drivers may instantaneously change the color of their vehicle with the push of a button.

The concept automobile uses e-ink technology, which is the same technology that powers Amazon’s extremely popular e-reader, the Kindle, to change colors instantly, rather than traditional metal panels.

The concept was shown live during CES this week in Las Vegas using a modified BMW iX, the company’s new flagship electric SU.

BMW intends to create a new range of electric vehicles known as the Neue Klasse, or a new class.

The BMW concept car was mostly a display vehicle with features that could be difficult to implement into mass production at cost-effective costs. Zipse nonetheless promised that BMW “will introduce this technology into our Neue Klasse… in serious production” to a crowded auditorium at the Palms Casino.

According to Zipse, “Digital leadership is not about who has the biggest screen.” Most of BMW’s luxury category rivals disagree with that stance, starting with electric car pioneer Tesla Inc (TSLA.O), which has made a large, high-definition screen the centerpiece of their dashboards.

A few media sources also got a deeper look at the car as it underwent a series of bizarre colour changes, which show a number of potential patterns:

Tiny microcapsules in a film coating on the automobile contain pigments that change when electricity is applied.

Arnold Schwarzenegger, Herbie the Love Bug, and KITT from Knight Rider appeared on stage with Dee during BMW’s CES keynote on Wednesday night, where she made her color-shifting premiere. (I guess you needed to be there.) This short film, which illustrates how Dee’s advanced features function, also stars Schwarzenegger:

People are enamored with this future idea and also fantasize about using this automobile.

The future of the color changing car for BMW has a name: “BMWi Vision DEE” and the possibilities are endless 🔥pic.twitter.com/Dnz2DCYlFD

Best friends love to match 😍 E Ink Digitalisation, to keep your car as unique as you. #TheUltimateCompanion, The BMW i Vision Dee. #CES2023 @EInk pic.twitter.com/oPWpB8lZ1z

The future of automobile is colourful at a touch of button.#CES2023 https://t.co/IJS8xml5EV

What do you think about this concept?

This CES concept car’s windscreen provides a view of “mixed reality,” and its 32 body colors may be changed using e-ink technology.Even if this is simply a concept that BMW plans to concentrate on in the next years, it nonetheless offers a look into the possibilities for the future. I may be a nerd, but I adore this vehicle!
What you think about this awesome and oustanding BMW’s I Vision Dee Concept ?