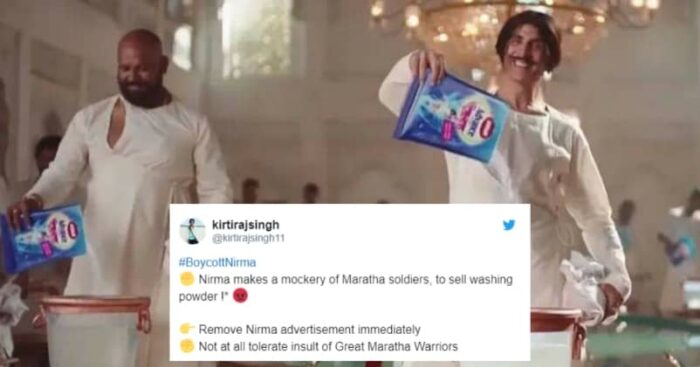 There have been many trending #boycott posts on Twitter targeting various brands and celebrities. This time, the new advertisement of Nirma featuring Akshay Kumar became the target!

#BoycottNirma is heavily trending on Twitter as the audience got hurt by the story the brand created for the marketing of Nirma Detergent Powder. Read the entire post below.

In the ad of Nirma Powder, Akshay Kumar plays a character of a Maratha ruler who has come back home after winning a battle with his fellow warriors. Due to such victory, they all want to have a big celebration when suddenly the queen mentions how their clothes are so dirty and only the women would have to take the responsibility of washing it.

To this, the king (Akshay Kumar) announces that if they can beat their enemies, they can beat the dirt of their clothes, too! This is the time when Nirma Washing Powder and its qualities are displayed in the scene.

Not many people liked the ad as their sentiments got hurt because they thought of the ad film as mockery of the Maratha warriors. #BoycottNirma began to trend heavily on Twitter, soon.


People accused Akshay Kumar of insulting Shri Ram in his recent movie “Good Newzz”, too followed by this ad film where he is targeted of disrespecting the great warriors.

In movie #GoodNewwz @akshaykumar, defame Lord Sriram by making objectionable statement.
He did it again, from this Ad.
Actually, as a fan, we easily forgive such person, instead of punishing them. It's our mistake.#Boycottnirma @Vish_kc @hjsvipul @AsYouNotWish @HJS_Mohan @kk_jpr https://t.co/DVPShWCzSr

A Positive Aspect Of Nirma Ad Came Into Sight!

Out of all the negative comments, a positive aspect has come into observation where people are quoting this ad to be a perfect example of “gender equality”. People are thankful that this ad expressed both genders as equal.

Beautiful message through Nirma ad, we should all appreciate the message of 'Gender equality'.#NirmaAdvanceSochAdvance
#BoycottNirma pic.twitter.com/W4E5ZSFLCv


People praised the film and thought of it as inspiration.

Amazing ad by nirma and Akshay Kumar nailed it ! Check this out guys ! #BoycottNirma #NirmaAdvanceSochAdvance pic.twitter.com/H8Av4uzqA7


There are always two aspects of situations. It all depends and reflects upon your own mindset. What is your go on the ad?