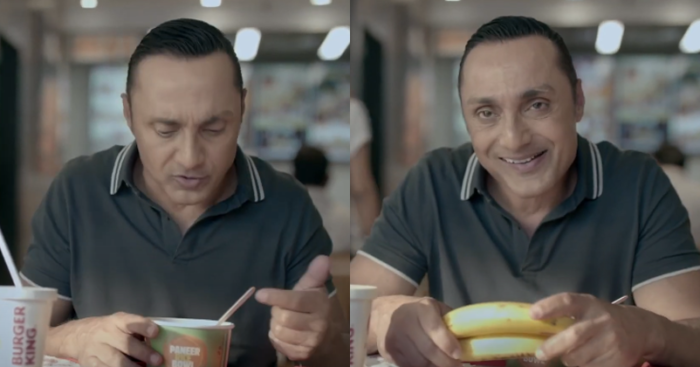 Over the years, brands have resorted to a more humorous tone of marketing. But of course, the reason behind it is that such ads tend to leave an impression on the customers. After all, that is the sole purpose of marketing.

Recently, Burger King India released an ad that has created a buzz on the internet. The ad starring Rahul Bose was shot pre-COVID times and had a hilarious reference. In the ad, Rahul Bose is called to the Burger King Santacruz outlet to try their new Paneer Rice bowl. Rahul Bose then goes on asking the price of the bowl and is surprised to know that it just costs Rs 99.

In the end, he gets served with two bananas free of cost just for him. Rahul had last year taken Twitter by storm when his 5-star luxury hotel had charged him a hefty fee for 2 bananas.

The ad campaign is also captioned with a lot of wit ‘Old Ad. Old Joke. Old Price’. Talk about the presence of mind and making most of the opportunity.

Srinivas Adapa, CMO, Burger King India said, “Burger King’s Paneer Rice bowl at Rs 99 is a great value proposition. We know that this ad is old and the joke is old…but so is the price at Rs 99.”

Before launching the video ad, Burger King began the campaign with an image of a Banana and pun ‘intended’. They also released the old headlines that were out after Bose’s banana tweet.

The entire ad campaign by Burger King India was based on the incidence Rahul Bose had with the 5-star hotel last year. Rahul’s experience was turned into a meme then after people criticized the hotel for overpricing the fruit highly. Now that the time has passed, Rahul Bose was a true sport to join Burger King in this amazing ad campaign.