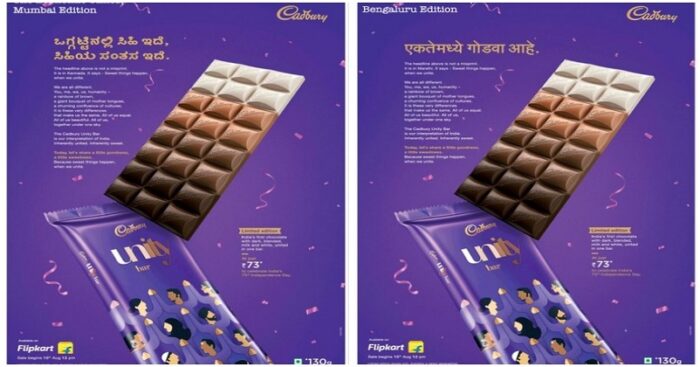 Cadbury has been the definition of chocolate for decades in India. The chocolate brands ad campaigns for every festival over the years has always been remarkable. Cadbury India‘s independence day ad campaign has won all our hearts once again.

This Thursday, a print ad for the company has sent across a subtle yet strong message across the nation. The full-front-page ad that was published in the Economic Times contained an image of Cadbury‘s new ‘Unity Bar’. What stood out was that the captions that were used were neither in English nor in the local language of the city.

Cadbury wished Independence day to everyone with a tweet saying, “This Independence Day, let’s celebrate a country that stands united in its diversity. Presenting the Cadbury Unity Bar, India’s first chocolate with dark, blended, milk and white chocolate all under one wrap.”

This Independence Day, let's celebrate a country that stands united in its diversity. Presenting the Cadbury Unity Bar, India's first chocolate with dark, blended, milk and white chocolate all under one wrap. #CadburyUnityBar #IndependenceDay pic.twitter.com/kHfHqJQlzH

Created by Ogilvy, the idea behind the ad was to foster a sense of unity in diversity, a trademark of Indian culture and history.

The ad in no time went viral on social media where people praised Cadbury’s ideology of uniting the nation. People all day long posted and retweeted the ad appreciated the effort and thought that the brand had put into it.

Whoa!! Well done, Cadbury's (and Ogilvy), using a Kannada headline in the Mumbai edition, Telugu headline in the Delhi edition and a Marathi headline in the Bengaluru edition. Point made beautifully! Lovely idea that turns our usual Hindi-centric advertising on its head 🙂 pic.twitter.com/XXXCdlcskG

Chocolate has no religion, no caste, no language, no bar…. well, maybe a bar, but nothing else from the above. Chocolate is Chocolate.

#Cadbury pulled a clincher today with it's Unity Bar ad. They took the audience by surprise. In Delhi, their copy began with Telugu, which further went on to explain the concept in English language. I liked the way, Cadbury cut across the clutter on #IndependenceDay without the

When our beloved pm speaking of One nation, #cadbury brand upheld the diversity of the nation. Brilliant expression of unity in diversity. Kudos. https://t.co/Ke3BOSscSN