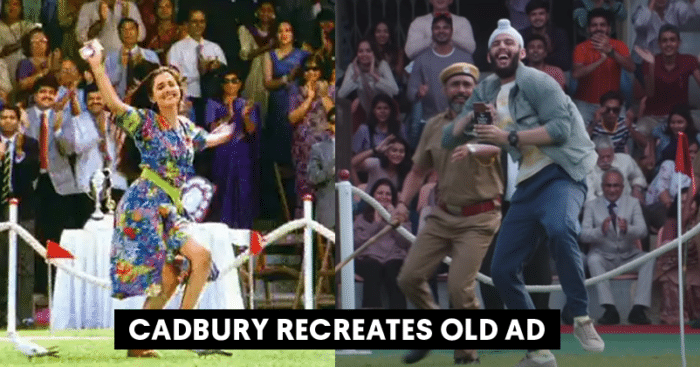 The image of a young girl breaking into a cricket pitch holding a bar of chocolate rings a bell, right? One of the most iconic ads of all times, conceptualized by Ogilvy & Mather, it was released in 1994. Its premise had a young lady watching a cricket match, enjoying her bar of Cadbury. And after a winning stroke by the batsman, presumably her friend, she rejoices and runs towards him in joy and dances an awkward dance in celebration. The then tagline ‘asli swaad zindagi ka’ plays in the background.

The ad had left a lasting impression in people’s minds’ and just as we see a flurry of good advertisements from the Cadbury camp, parent company Mondelez and advertising company Ogilvy have done it right again.
They recently launched a similar ad where the premise is the same, but the game has a lady batsman and running towards her in elation with a Cadbury in hand, is her male friend. Ending the ad with #GoodLuckGirls, the ad shows how times have changed, breaking gender stereotypes, and what girls are achieving in today’s times.

According to the chief creative officers, Kainaz, Sukesh and Harshad, re-creating the ad was no child’s play. However, the re-inventing of this enigmatic ad always felt right, from the idea’s inception. This ad, thought by an all-girls team is made by Good Morning Films.

According to Anil Vishwanathan, Senior director, Marketing, Mondelez India, the brand has always propagated gender inclusivity and this has been shown very well in the advertisement. Considering the visual as an ode to women, he feels that small steps taken in the right direction, can make the world a better place for them to live.

The ad is sure to get everyone watching it nostalgic.