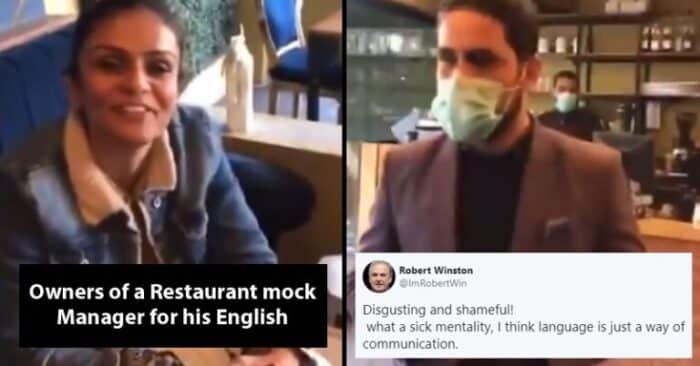 Just like any other language, English is a way to communicate with others. The popularity of English across the world is due to its wide acceptance, but sometimes we see people judging a person based on the fact that how fluently he/she can speak or write in English. This is common in Asian countries and recently a cafe became the topic of talk after a video went viral on internet showing two women mocking the manager of the cafe for his English-speaking skills. Raza Ahmad Rumi posted the clip on Twitter and described the incident as “sad”

This is just so sad. Class privelege, colonial hangover and depravity of Pakistani elite — all rolled into one clip. The hero here is this manager and my salam to him for his hard work, dedication and putting up with this! pic.twitter.com/8IVnE6nSYv

According to the online sources, these women named Uzma Chaudary and Dia Haider are the owners of Cannoli By Café Souland. They can be heard making fun of their café manager Owais.

Netizens became angry and some of them even used the hashtag #BoycottCannoli. Here are some tweets:

Guarantee you these women would LOVE my horrible Urdu while they mock a working man who speaks multiple languages.

It's good to see many ppl supporting the manager of Cannoli. I hope someone offers him a better job.

Women struggle in many ways, so it's truly sad to see 'empowered' women treat one of their loyal employees of 9 years this way. https://t.co/aAAQHI1Siq

English is just a language, not a parameter for measuring your intelligence. So if you don't know English, it's okay. That doesn't undermine your intellectual faculties.

To the female owners of Cannoli who filmed this man Awais and made FUN of his English, this is called WORKPLACE HARASSMENT and what you two privileged BURGERS did is the most DISGUSTING thing. ENGLISH IS NOT THE MEASURE OF INTELLIGENCE!!!!#BoycottCannoli pic.twitter.com/LLuqUUONiI

May be I am overthinking this but I think some of us would boycott this place (as its the easiest thing to do). But the first one to suffer from this would be their staff. A better but not the easiest way would be to help their staff find another job & then boycott the place.

Some deciding to boycott this place. Don’t do that. The manager will face. Rather go there & give 5 star to this employee. He managed this Restaurant without knowing English. He deserves applause.

After getting to know about this backlash, the owners did realize their mistake & issued an apology if they have offended anyone; however, they also said that it was a normal chit-chat and there was no intention of hurting anyone. Read the post below:

A post shared by Cannoli by Cafe Soul (@cannoli_cafesoul)

What are your views on this whole thing? Share your thoughts in the comments section.