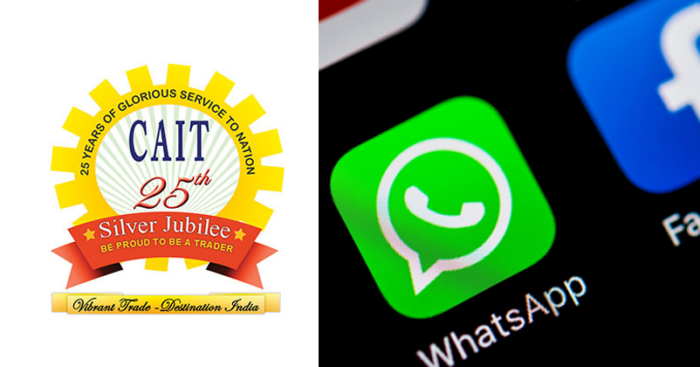 After the recent revelation of WhatsApp’s privacy concerns surrounding user data, passwords and more, the Confederation of All India Traders (CAIT) have requested The Minister of IT and Communications, Mr. Ravi Shankar Prasad, to ban WhatsApp and its parent application, Facebook in India.

They have sent letters issuing their concern over the tampering of the privacy policies. WhatsApp’s privacy policy clearly states that it shared the data with Facebook. This includes personal data, contacts, credentials of accounts, among other things and can actually hamper the security of the entire country. In the letter, they have also mentioned that this is straight against the fundamentals of the Consititution of India (COI) and that the Government needs to intervene as quickly as possible.

.@CAITIndia Secretary General Shri @praveendel explains how dangerous #newwhatsapppolicy is for the citizens of India. We reiterate our demand to Minister Shri @rsprasad to take immediate necessary action & restrict #whatsapp from implementing the policy or ban it @GoI_MeitY pic.twitter.com/CcennaHQrh

For those of you who might still be unaware, WhatsApp recently updated its privacy policy which allows third party applications and Facebook to receive a user’s data. It also works for these third party organisations in providing data bout users to Facebook and WhatsApp.

This has made the app receive a lot of criticism from individuals, organisations as well as the great minds of the world. Tesla’s CEO Elon Musk also stated in his tweet, asking users to try the new ‘Signal’ app as an alternative since it was end-to-end encrypted.

Alarmed by the recent changes to WhatsApp's Privacy Policy but confused about what exactly is going on? Well, we have got you covered with this explainer! 1/nhttps://t.co/oNOSGEVH0u pic.twitter.com/R5EqsojvXp

Joining the sentiments, another firm known as Privacy International is strongly opposing users from trying WhatsApp any longer.

Now that #WhatsApp have updated their terms, forcing users to share their data with #Facebook, here's our suggested update to that notification you see at the top of your chats.#WhatsappNewPolicy #WhatsappPrivacy pic.twitter.com/FjxFGBm6Q8

What do the users have to say about this? Check out the reactions below to CAIT’s request for Government intervention on this matter.

The government should take urgent cognizance.

One user also recommends a Government-funded alternative in order to promote #VocalforLocal.

We should install made in India app. Namaste Bharat!
Please check out NamasteBharat app. I am using it to message and call my friends and family. Download for free at https://t.co/LnRraofdLk

What is your opinion regarding WhatsApp’s recent policy update?