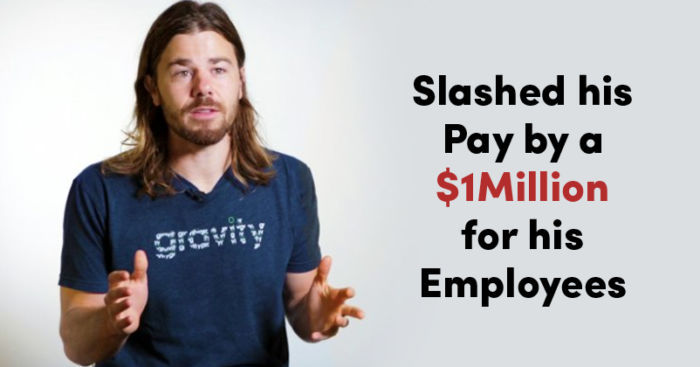 Often we come across news where CEOs or Company heads take the initiative to help the employees of their companies. Their gesture is always appreciated and also helps in boosting the morale of the employees.

Setting another example, Dan Price, a Seattle-based CEO of a financial services company Gravity Payments, slashed his million-dollar salary by 90 percent in 2015 in order to raise the minimum salary for all his employees. Dan took the step so that his employees could get a minimum salary of $70,000.

The decision was not easy at all. Dan took a $1 million pay cut and realized that he would have to mortgage his houses and give up his stocks and saving. However, it is because of this reason that his company is doing so well after all these years.

The incident came into light when Dan himself shared it on his Twitter handle in August this year. His tweet read, “When I started a $70k minimum wage for my company in 2015, Rush Limbaugh said: “I hope this company is a case study in MBA programs on how socialism does not work because it’s gonna fail” Since then our company tripled & we’re a successful case study at Harvard Business School.”

Since my company started a $70k min wage in 2015:
*Our business tripled
*Staff who own homes grew 10x
*401(k) contributions doubled
*70% of employees paid off debt
*Staff having kids soared 10x
*Turnover dropped in half
*76% of staff are engaged at work, 2x the national average

According to Dan, Gravity Payments‘ business has since tripled, the number of employees who own a house has increased 10 times, 70% of employees have paid off their debts, employees have been able to lead a happier life and many have even started planning a family with their partners.

Dan has been very vocal about the importance of retaining your best employees. He truly believes that these employees are not an expense but an asset. Take a look at his recent tweet.

Employees are not an expense.

They are an asset.

Treat them like human beings who will benefit your company and you will see that.

For those who follow the CEO on Twitter will be aware of how woke he is around the working conditions, an average employee survives in. If only there were more businessmen who understood how important socialism can be, it will not only empower the employees but also give desired results to the management.