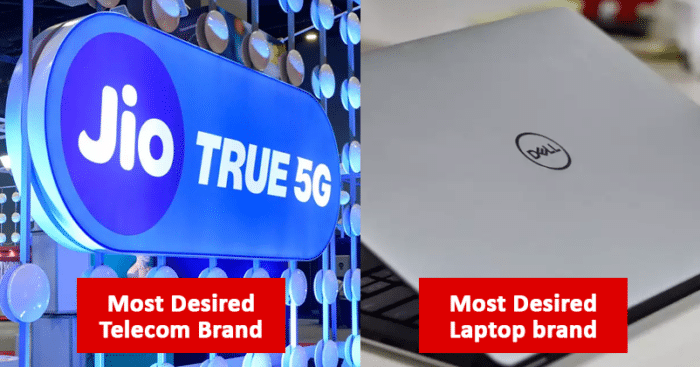 In its ‘India’s Most Desired Brands 2022’, TRA ranked companies according to their brand strength. Reliance Jio ranked no.1 in the telecom category, followed by Bharti Airtel, Vodafone Idea Ltd, and BSNL.

In the branded fashion category, Gucci ranked number one as a luxury brand while Fastrack, Armani, and Denim took the remaining four places respectively.

As for tech, Dell Laptops ranked number 1 all over India while HP took the second spot, and Apple and Lenovo took the third and fourth spot respectively.

As for Luxury cars, BMW has topped the list in India with Audi, Mercedes-Benz, Jaguar, and Volvo following its lead.

LIC was ranked 1 on the banking and financial services index followed by the State Bank of India at number 2, and ICICI Bank at 3rd place.

As per the report, TRA, a consumer insights and brand analytics company, has for the last seven years, been conducting syndicated research on Brand Desire with consumer influencers, the 10% of the population that usually influences the balance 90%.

TRA’s Most Desired Brands 2021, is arrived at through primary research based on TRA’s proprietary 12-Behaviour Desire Matrix conducted among 2000 consumer-influencers respondents across 16 cities.