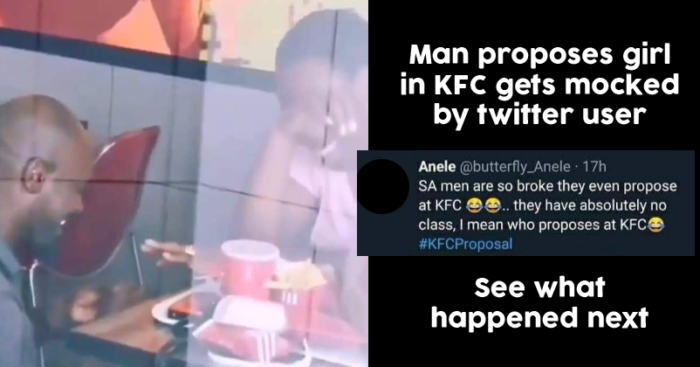 In recent times, wedding proposals have gone a little over the top. People find beautiful locations and orchestrate the most romantic proposals as possible. Not just men, even women are now planning and taking so much effort to make the day of the proposal the most memorable one for them and their loved ones.

But more so, these proposals are so extravagant so that people can post them on social media and show it off to their friends & family.

But not all of them. Recently, one such couple was seen sharing the beautiful moment but in a less glitzy & glamorous way. A guy was seen proposing to his girlfriend at KFC.

The moment was captured by a journalist who later went on and mocked the couple for their gesture on Twitter. Little did he know that his trolling was going to turn out as a blessing in disguise for the couple. 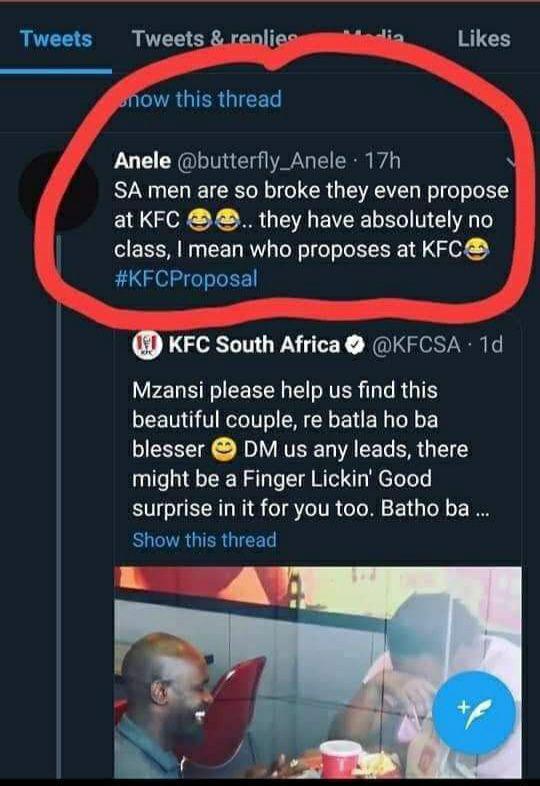 Soon the post went viral and various brands came forward to show their support and wish the couple the best for their wedding in their own way.

Woolworths SA, an Australian supermarket/grocery store chain owned by Woolworths Group, replied that they would like to gift the couple a voucher worth R15K.

The wishes were just flooding, and the beverage giant, Coca-Cola, just couldn’t hold back either. They are now sponsoring the soft drinks for the wedding.

KFC South Africa had something to say too.

Billy Dlamini, the founder of Billdore Jewelry, decided to gift a pair of beautiful rings to the couple.

Many famous South African celebrities, singers & artists, showed their support too and wished the couple on Twitter along with requesting them to invite them to the wedding too.

Sony Movies SA wanted to be a part of the festivities and this is how they showed their love for the couple.

Not just that, even their honeymoon got sponsored by Kulula Holidays & Roadtrippers Travel.

And now look at what Audi South Africa posted.

Puma South Africa gifted threads worth R10000 to the couple.

Huawei Mobile is all set to send the couples 2 new devices to capture their wedding moments.

And how could someone forget about the groom’s wedding suit?

Above all, it can all be live-streamed all thanks to Eyewitness News.

The couple would not have thought that their small private moment which got mocked by one person would end up fetching them love and support from all over the world.

The moral of it all is, no matter how big or small your gesture is, if it is true it will be seen and loved by all. We would wish nothing but the best for the beautiful couple and would love to witness their holy matrimony if possible.

What are your thoughts about the couple?