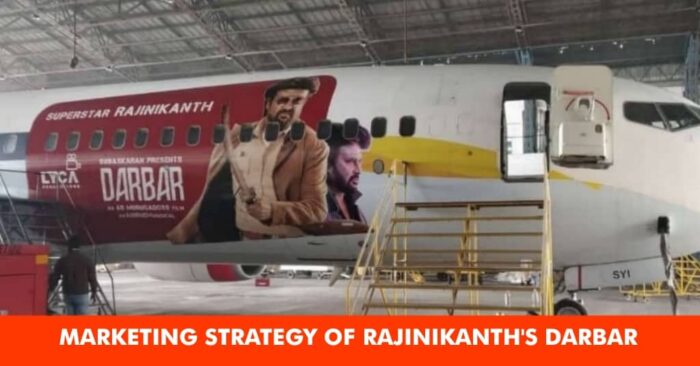 Thalaiva Rajnikanth‘s upcoming blockbuster film, Darbar, is about to hit the theatres on 9 Jan’20. Rajnikanth, the superstar he is, needs no amount of marketing or promotion for his movies, his name alone does the magic.

His fans love him immensely and are happy to see as much of the superstar on the silver screen as much as they can.

But for the upcoming movie, team Darbar has tried every rule rule by the book and for that matter even thought out of the box to make sure that the movie gets its grand welcome.

There was one promotion technique that has got all the social media to chatter about.

The movie promotion began when SpiceJet airlines unveiled ‘Darbar Rajini’ livery on its flights. The outside branding on the aircraft bearing an image of Rajinikanth in police uniform from the movie Darbar was displayed. The pictures of the flight were shared by Anirudh, the film’s music director and Rajinikanth’s nephew, on his Instagram page.

Many people twitted the picture of the aircraft while boarding it.

I didn't believe it in my first look. Thought it was just photoshop😂
No, it is not , yet again #Thalaivar at his peak as good as his humbleness….🙏
Only possible for #Thalaivar 👍
One and only #SuperstarRajinikanth #DarbarPongal#DarbarFlight pic.twitter.com/wG28r9JRkJ

This is not the first time Thalaiva‘s team has chosen this mode of promotion. In 2016, the makers of Kaala also did the similar thing and had the movie posters all over the aircraft for the world to see.

Darbar, the film is directed by AR Murugadoss and stars Nayanthara as the female lead. Darbar will hit the big screens on January 9 and will also see Nivetha Thomas, Yogi Babu and Suniel Shetty in key roles.

The film will clash its horns with Deepika Padukone’s Chhapaak and Ajay Devgn’s Tanhaji: The Unsung Warrior at the Hindi box office. Only with time we will be able to see which movie proves to be the best among the rest.

Also Read: Creative Marketing Strategies Of Mardaani 2 That Made It A Success