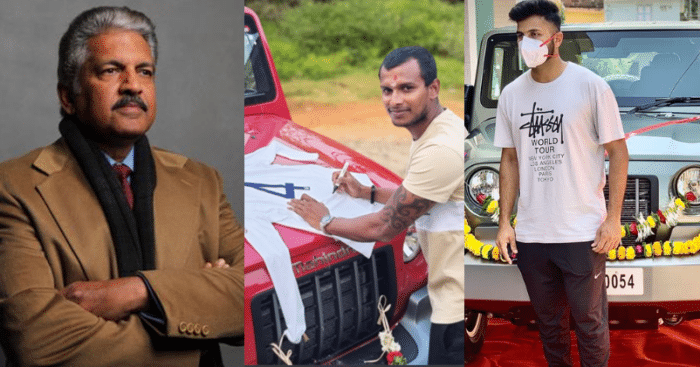 Anand Mahindra has always been a man of his words. Apart from all the groundbreaking work he has done in his life, Mahindra is also known to appreciate real talent through his social media handles. Earlier in January, Mahindra was impressed by the brilliant performance of some of the Indian cricketers during India’s 2-1 series win against Australia in Border-Gavaskar Trophy.

The cricketers, Shardul Thakur, Shubman Gill, Mohammed Siraj, Washington Sundar, Navdeep Saini, and T Natarajan were the ones who specifically caught his attention during the series. Mahindra was so impressed that he tweeted that he wants to give each one of them an “all-new Thar SUV on his own account with no expense to the company.”

It seems that Mahindra has kept his promise as cricketers T Natarajan and Shardul Thakur recently posted on Twitter a thanks note to Anand Mahindra after taking delivery of their new cars.

T Natarajan shared how privileged he feels while representing India on such a big platform. He further stated that all the love and affection he has received along the way has overwhelmed him. He further thanked Anand Mahindra for the appreciation and for recognizing his journey.

As I drive the beautiful @Mahindra_Thar home today, I feel immense gratitude towards Shri @anandmahindra for recognising my journey & for his appreciation. I trust sir, that given your love for cricket, you will find this signed shirt of mine from the #Gabba Test, meaningful 2/2

Replying to T Natarajan’s tweet, Mahindra thanked him for the return present which was a signed t-shirt by him. Anand Mahindra said that he will be wearing it with pride and even called the cricketer with a nickname of his own, Nattu.

🙏🏽🙏🏽🙏🏽 Thank you Nattu. I will treasure the return present & wear it with pride… @Natarajan_91 https://t.co/KxciWdQ1ai

While T Natarajan‘s model was red in color, Shardul Thakur‘s car came in a grey version. Shardul went on to thank the business tycoon and the company for this amazing gesture. He also thanked Mahindra for recognizing their contribution on the tour of Australia adding that Mahindra Rise has built an ‘absolute Beast’.

New Mahindra Thar has arrived!! @MahindraRise has built an absolute beast & I’m so happy to drive this SUV. A gesture that youth of our nation will look upto. Thank you once again Shri @anandmahindra ji, @pakwakankar ji for recognising our contribution on the tour of Australia. pic.twitter.com/eb69iLrjYb

The All-new Mahindra Thar is available with three rooftop options that are, a hardtop, a soft rooftop, and a convertible soft top. The cabin also gets a slew of new additions like front-facing rear seats, a touchscreen infotainment system, ABS, airbags, and two airbags, cruise control, traction control, VSM, and more. Mahindra Thar is the first off-road vehicle in India that has scored a 4-star safety rating.